Happy New Year! (And when do we stop saying that?)

I hope you and yours had a wonderful holiday season and your new year is off to a great start. Despite not being able to see most family as usual, our young children made the season very exciting/exhausting as always! As our children get older, I have found that the number of Christmas gift wishes seems to shrink, but the cost per gift rises dramatically. In general, it seems that younger children ask for more gifts, but they are generally less expensive. My wife and I (okay, mostly my wife) try to make Santa look as even-handed as possible when the kids first come into full view of the tree on Christmas morning.

As with many things, value is in the eye of the beholder (I know the expression is ‘beauty is in the eye…’ but I think this works), so my youngest values her very inexpensive pretend ice cream cart just as much if not more than my oldest kid’s relatively expensive (and VERY hard to put together 😊) quarter pipe skate ramp.

I don’t think it’s too much of a stretch to say that there is a similar phenomenon with stocks in  auto manufacturing. My colleague Tyler and I were recently discussing the market valuation of Tesla vs. Ford as compared to how many vehicles each has actually sold over the last year. In short, Tesla sold almost 500,000 vehicles last year vs. Ford’s over 550,000 PER QUARTER! Yet, Telsa’s current market value outpaces most other manufactures COMBINED. 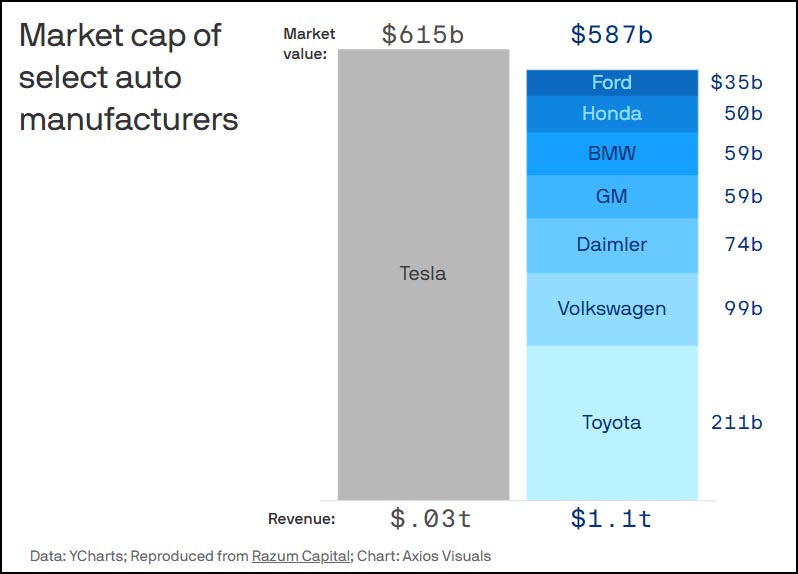 In spite of all of these facts, Tesla’s stock price is up over 733% over the last year and Ford’s is down about 5%. As Blaine Rollins, CFA at 361 Capital put it, “I like Tesla as much as most car enthusiasts, but it will have to get into many more businesses to justify its current valuation.” Often, and especially over the past year, a stock’s price does not match up with its revenue; so that means that with Tesla, investors are expecting very big things from the company going forward. As you can see from the chart above, Tesla’s revenue as has a very long way to go to catch Ford (which represents the smallest revenue number on the cart). Talk about value in the eye of the beholder (or investor)!

Lastly, I do have an annual debate (mostly with myself) around how long into the new year should you actually wish someone ‘Happy New Year?’ I think it would be very helpful for all if there were an official cutoff date. I am not sure when the appropriate date is, but my vote would be for the end of January at the latest. If you are still saying ‘happy new year’ into February, you need to come up with another greeting! Although I suppose you could say it on Groundhog Day (Feb 2nd) if you are attempting to be clever! 😊

Happy New Year! (And when do we stop saying that?)