Based off the recent headlines, it can sometimes feel like the economy is disconnected from the market. Take this headline for example:

Inherently it’s strange to see that news of a disappointing jobs report would cause the markets to rise.  However, investors are keeping a close eye on the pace of the economic recovery and full employment numbers, which correlates to two investor sensitive topics we’ve touched on a lot lately — expected inflation and short term interest rates. So, it actually makes sense that investors tend to feel optimistic when data is released pointing to a possibility of prolonged easy monetary policy and signs that there is still room to run in terms of growth.

It’s important to note too that stocks tend to lead the economy, with economic data lagging major market inflection points.  In other words, stocks “price in” what they foresee to happen in the future. The table below shows that bear markets tend to start and end before recessions start and end (with the exception of the 2000-2002 bear market, which continued a little after the 2001 recession had ended).

And while it is incredible to see the stock market going up, up, up over the past few months, looking at the underlying performers sheds some light on why this is. The S&P 500 is a market cap-weighted index which means that the 500 companies are valued the total market value of their outstanding shares (the share price x the number of outstanding shares). The big 5 (Apple, Microsoft, Amazon, Google, Facebook) accounts for over 25% of the S&P 500 and for 2020 they were outperforming the other 495 stocks by 65%.  Since end of last year though, the tables have turned and the areas of the market that were lagging are now catching up. 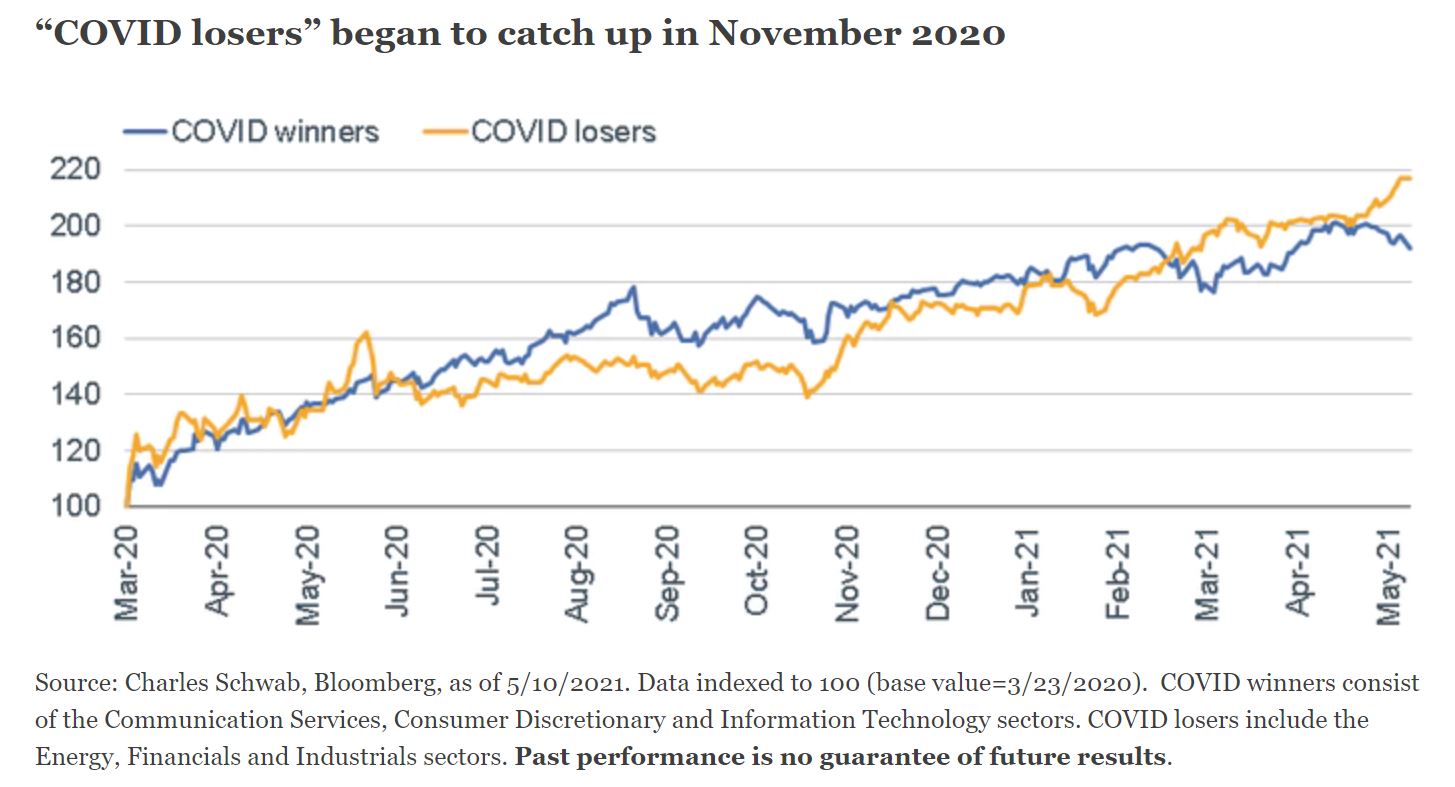 So when we are seeing headlines about the “market” hitting new highs, what we are really seeing is somewhat of a rotation from the big 5 dominating the market to the market “pricing in” the eventual recovery of the sectors affected most negatively by the pandemic and / or didn’t fall into the “stay at home” category.

We can actually begin to see a connection between market performance as well as the increased volatility with the ebb and flow of the economic recovery.  However, we are in a unique time in history where greater number of factors gauge the health and speed of the economic recovery, causing greater volatility.  George Washington University economist, Tara Sinclair stated it perfectly “During normal times, you can just track a handful of indicators to know how the economy is doing. … When big shifts are going on, you’re tracking literally hundreds of indicators.” This could certainly be a reason why the economy and the market feel disconnected at times, there are so many factors at play!   Here are just a few of the economic factors we continue to watch:

There is also an argument that there is a disconnect between the appreciation in stocks to the appreciation of gross domestic product (GDP).  The ratio of these factors is referred to as the “Buffett Indicator”.  Currently the ratio is higher than ever, indicating that stock prices are “frothy” (based off the Wilshire 5000).  However, this ratio could very well be reduced as the U.S economy continues its recovery, causing a surge in GDP.

The below chart shows the World GDP has fully recovered to pre-pandemic highs, indicating an upward tick. 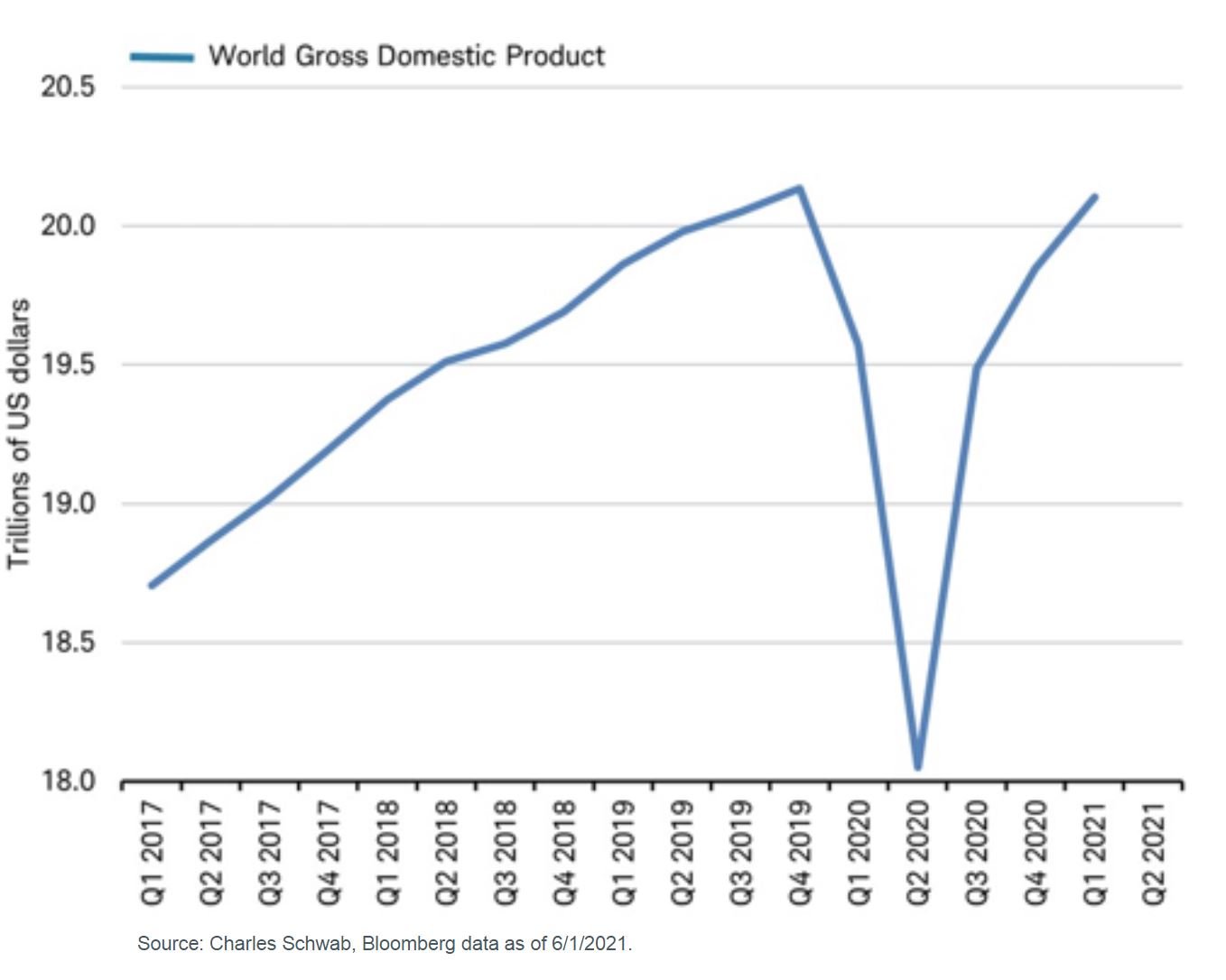 All of this saying that while the markets and economic data seem to move in opposite directions, taking a closer look indicates a connection between the two.  Not to mention a reminder that the market prices in what they expect to see in the future,  whether they may bullish or bearish in nature.

Speaking of “disconnects”, apparently there is a disconnect between my perceived ability to cut my son’s hair versus the reality of cutting it.  Good thing he doesn’t seem to care!

And yes, we did fix it….. after getting a few good laughs in.