If you were born in the late 70’s or early 80’s, you might remember the No Fear “lifestyle” clothing brand that was very popular in the mid 90’s and early 00’s. Personally, I found the brand and the attitude that its wearers often embodied a bit off-putting. If you still wear any of these t-shirts or have a sticker on your truck, you may need to do some self-analysis! (in my humble opinion). Not surprisingly, the company filed from Chapter 11 bankruptcy in 2011.

My son continues to display “no fear” when it comes to bike riding, trampolining, skateboarding, rollerblading, or anything else that involves movement and activity. Almost exactly two years ago today, he broke his leg on a trampoline just before he was to start kindergarten. He had a full leg cast on his first day of school! At least it was in his favorite color green.

Fast forward to this past Sunday, and he decides to see how fast he can go down a hill on his rollerblades. The answer was pretty darn fast, but it also resulted in a broken collarbone! So, there he was again, in almost the exact same place in the same hallway of the same emergency room…maybe someday he will learn to have some fear. I think I will start a new lifestyle clothing brand called: Some Fear. Order your truck decals now!

I think having some fear when it comes to investing is healthy and necessary. As with most things, there is a fine line between having too much fear and having no fear. Keeping all of your money in a low-interest savings account would be too much fear, and trying to pick stocks and time the market would be no fear.

Not surprisingly, there’s an index for that! The technical term is the CBOE Volatility Index (or VIX), but many people refer to it as the “investor fear gauge.” The lower the number, the calmer S&P 500 is expected to be over the next 30 days. Recently, the VIX hit lows not seen since December of 1993. In other words, the market continues to show no fear of volatility. I think this is mostly a good thing, as it is important for investors to ignore the noise and focus on the fundamentals of investing. And, there is certainly plenty of noise these days. 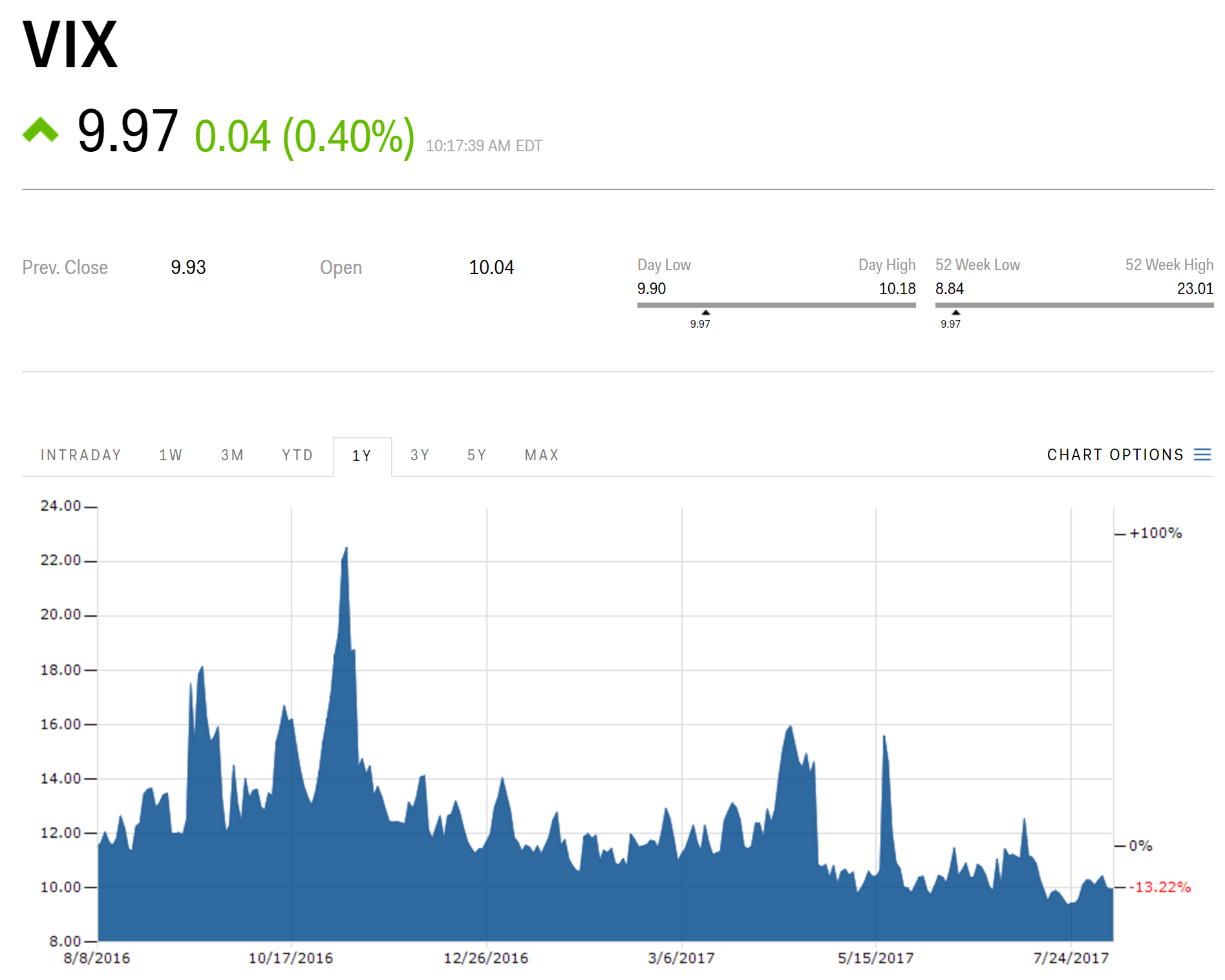 Just be wary of having no fear and being too aggressive for your particular situation. Markets can and will go down, and the best way to combat that inevitability is not through market timing. It is through diversification (owning lots of different types of assets), and regular adjustments and reviews.

No Fear
Tagged on: Advice    Diversification