Back to the Routine

Unlike Nathan’s children that had to start school this week, our kids don’t go back until after Labor Day. 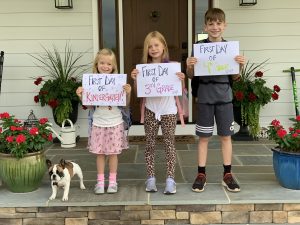 –The Gilbert kids not at the beach

So, to squeeze the last bit of summer fun in, we are spending some of our last few days of freedom at the beach. 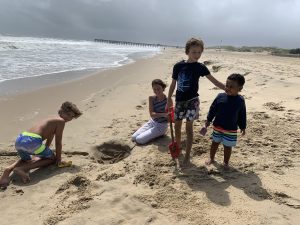 –The Yakel kids at the beach (+one cousin!)

When we return from the beach, our kids head right back to school.  They go from a week of being shoeless in the sand and wearing bathing suits for most of the day to itchy uniforms and closed-toe shoes.  The griping we hear about their shoes being too small always makes us laugh—they just simply are not used to wearing shoes at all!

Returning to school is such an ordeal, it’s a new routine—getting up early, navigating teachers and friends, after school activities, then homework, dinner, bed.  We are all exhausted by the end of the first week.  Family blogger, Jen Hatmaker offers this great advice for the Friday after the first week of school:

Dear ones, this is my yearly PSA because I am here for you and sometimes we forget things:

By the end of your cherubs’ first week of school, they are:

Listen to me: do not go to “celebration dinner” Friday night, do not go to the late football game, do not decide to run errands, do not make big plans, do not ask one million questions, do not force them to talk about everything, do not attempt to execute ANYTHING AT ALL in which your expectations include children who are pleasant.

They are like overfilled balloons. Should you accidentally push them too hard by, for example, asking them to chew with their mouths closed or making suggestions for dinner or any other unreasonable pressure, they will violently burst and ruin the thing you were dumbly considering as a Fun Family Situation.

Your Friday night plans after the first week of school need to involve a couch, some blankets, a pizza, and a movie. That is it. That is all anyone can handle. Your kid will make it past the first twenty minutes tops. They are all goners. Do not put them in the car and try to go somewhere, because they will turn your car into the Crazy Train.

Your mission should you choose to accept it because you are a Smart Person is to do and plan nothing the first weekend after school starts. Let their little bodies catch up. They are exhausted after their summer of being sloth children who now have to think and pay attention for seven hours a day.

For almost 60 years, our daily routine looks like this:

But after retiring there is nothing requiring you to get up at any specific time, be anywhere, do anything…new retirees can feel adrift.

Here are a few thoughts about planning how to spend time in retirement:

Back to the Routine