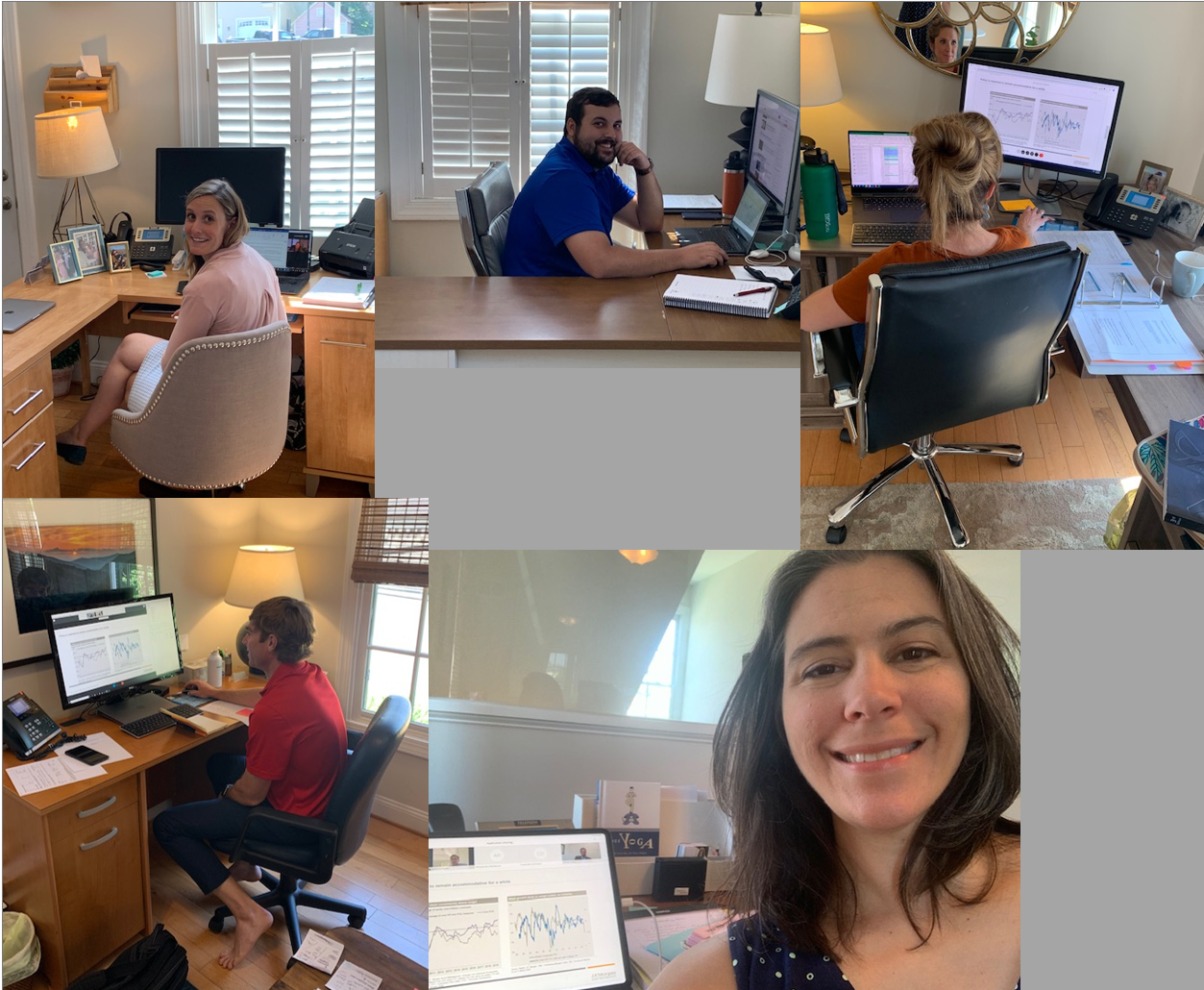 We usually head to Tysons to a nice hotel conference center and hear from the top economists at JP Morgan in person…but this year, we are all sitting at our desks, listening in.  While virtual events are always a challenge, we also miss the great spread of food that the hotel usually provides.  Our Meridian K-cup coffee and packed lunch isn’t nearly as fun.

One of the common themes across each of the presenters is just how much the markets are rallying in the face of the reported economic data.  Even for a casual observer, it has been confusing to read the financial headlines (depressing) and watch the stock market (exciting).  Here is the headline from Yahoo Finance yesterday as the market rallied to positive territory for the year, and is up about 25% since April 1, 2020: 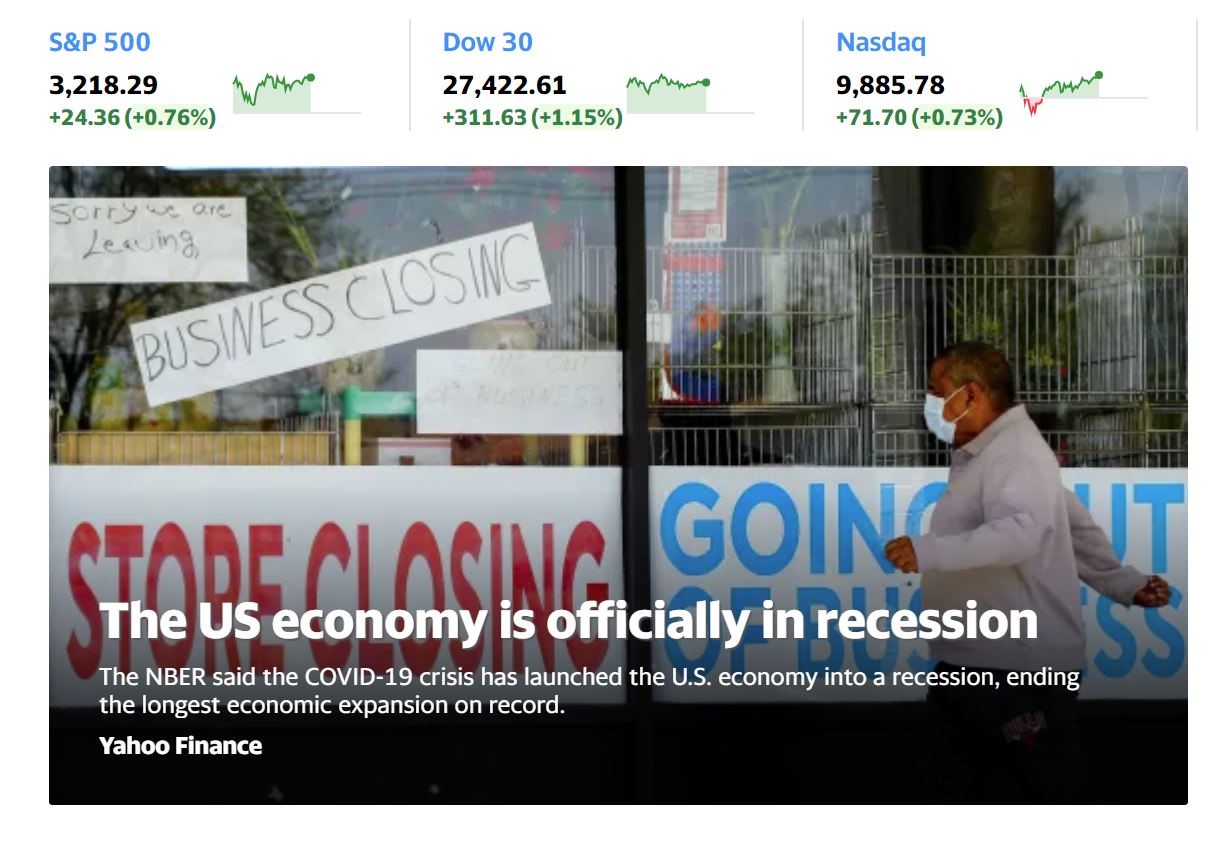 Right now, it appears that investors are trading on excitement that the news is “less bad”.  It is still pretty awful—there are still 21 million unemployed Americans, but that is less than what was expected.  The unemployment rate was expected to be over 14%, but surprisingly 2.5 million jobs were reported as created last week, which made investors practically giddy and sent the stock markets up 3% in a day. 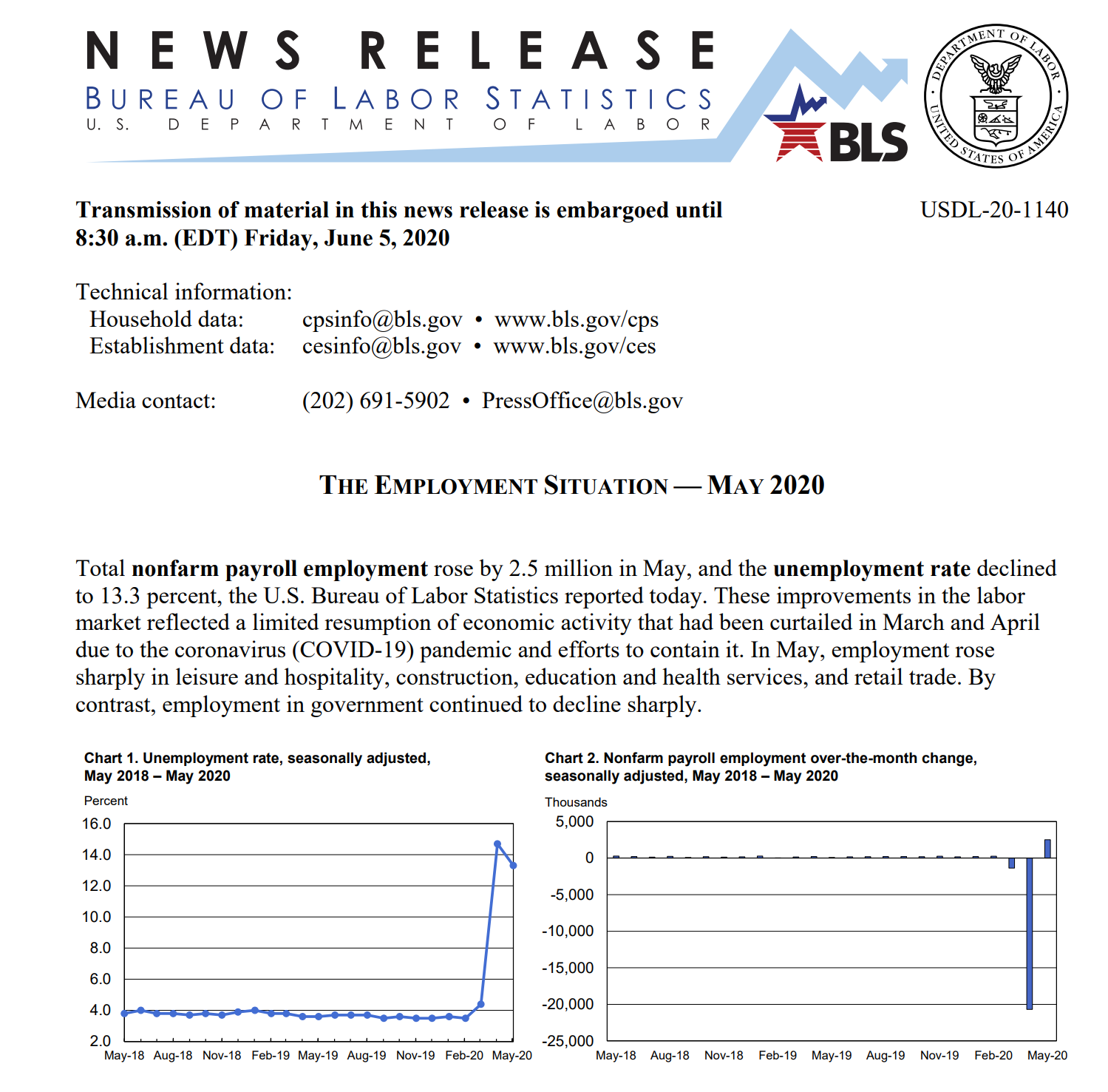 Additionally, the classifications of the unemployed were adjusted, with 80% of those currently reported as unemployed reporting that their job loss was only temporary: 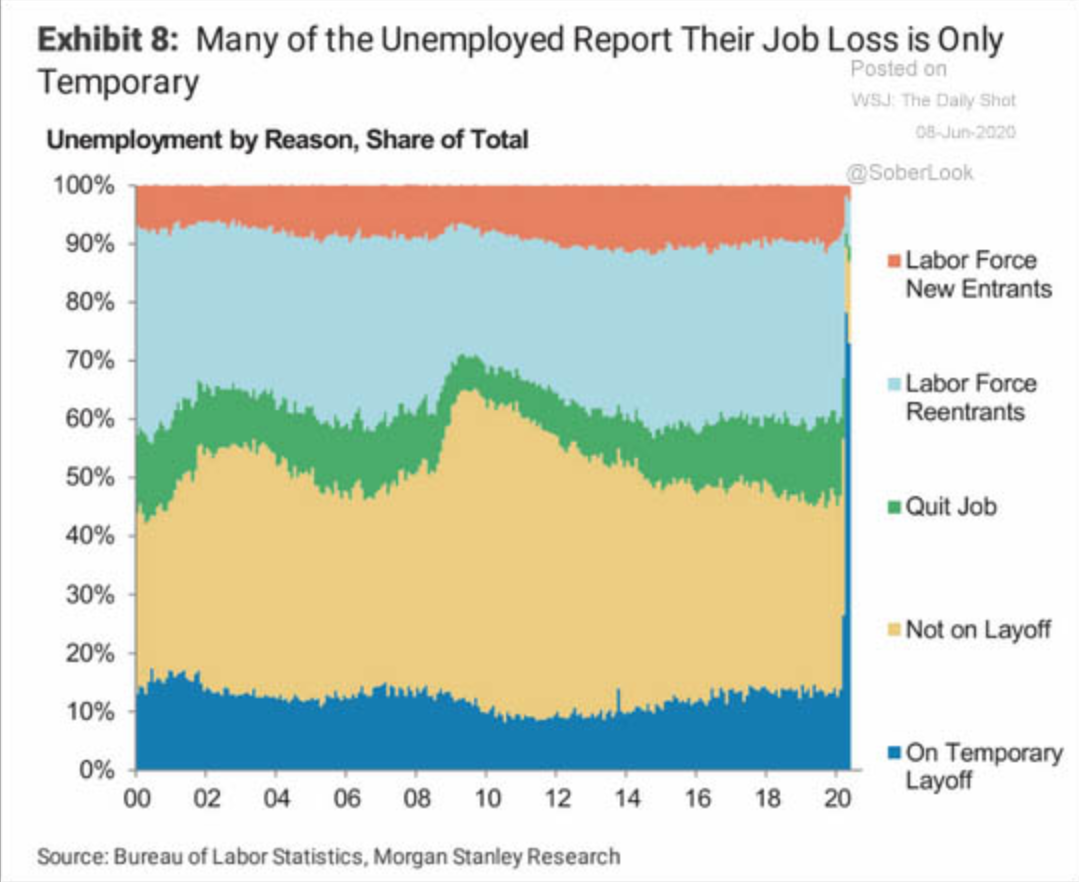 Investors are also emboldened by the Federal Reserve’s herculean rescue efforts…in less than 3 months, the Federal Reserve has backstopped all sorts of assets and ensured that financial markets can function without stress.  In a press release on March 15, 20202, Chairman Powell said, “We thought it was quite important for us to take strong measures to support proper market functioning in important markets.”  And boy, did they…in the six weeks after that press release, the Fed took the following actions: 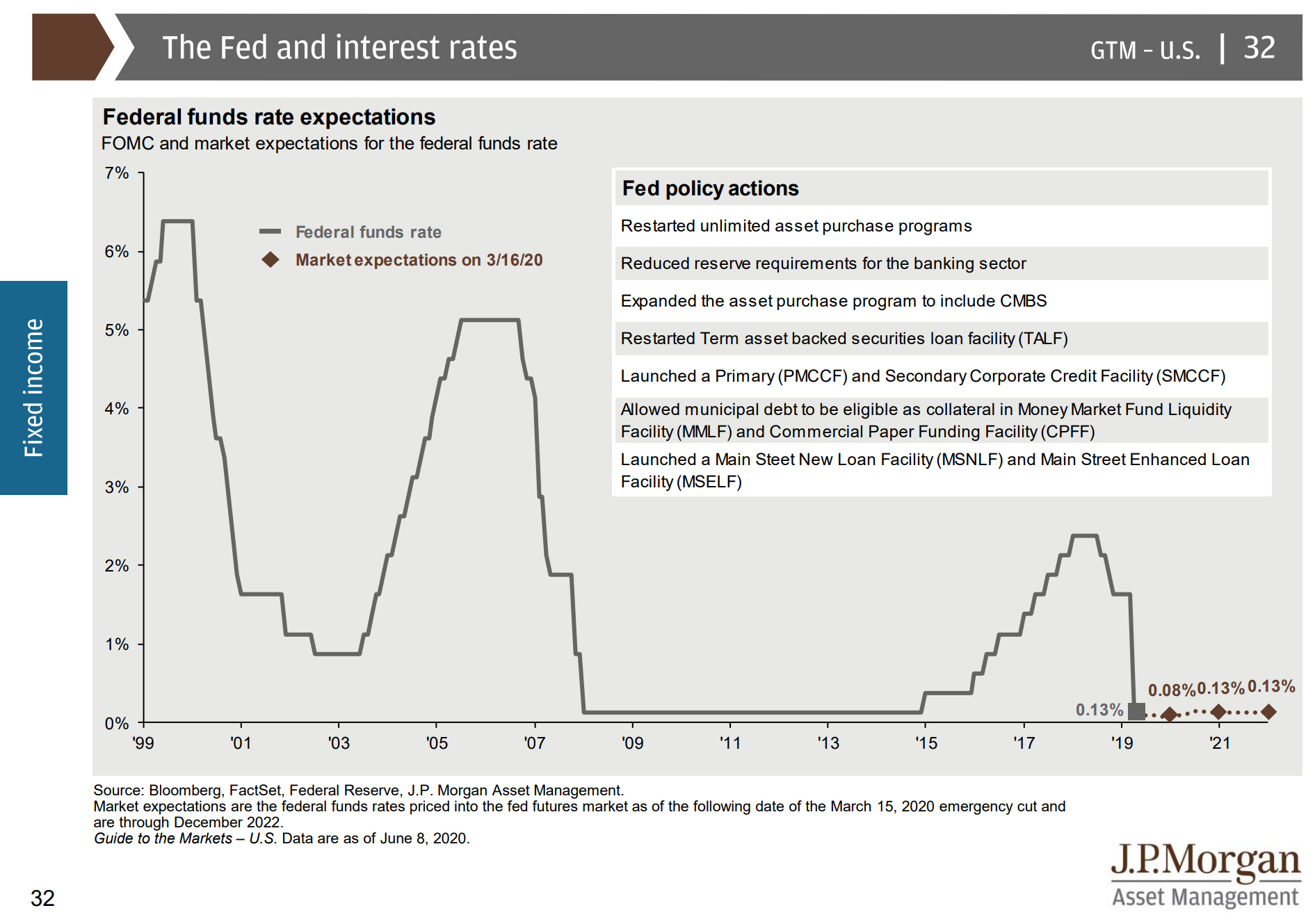 The total impact of these Federal Reserve actions is estimated to be about $6 trillion of liquidity added to the financial system!! 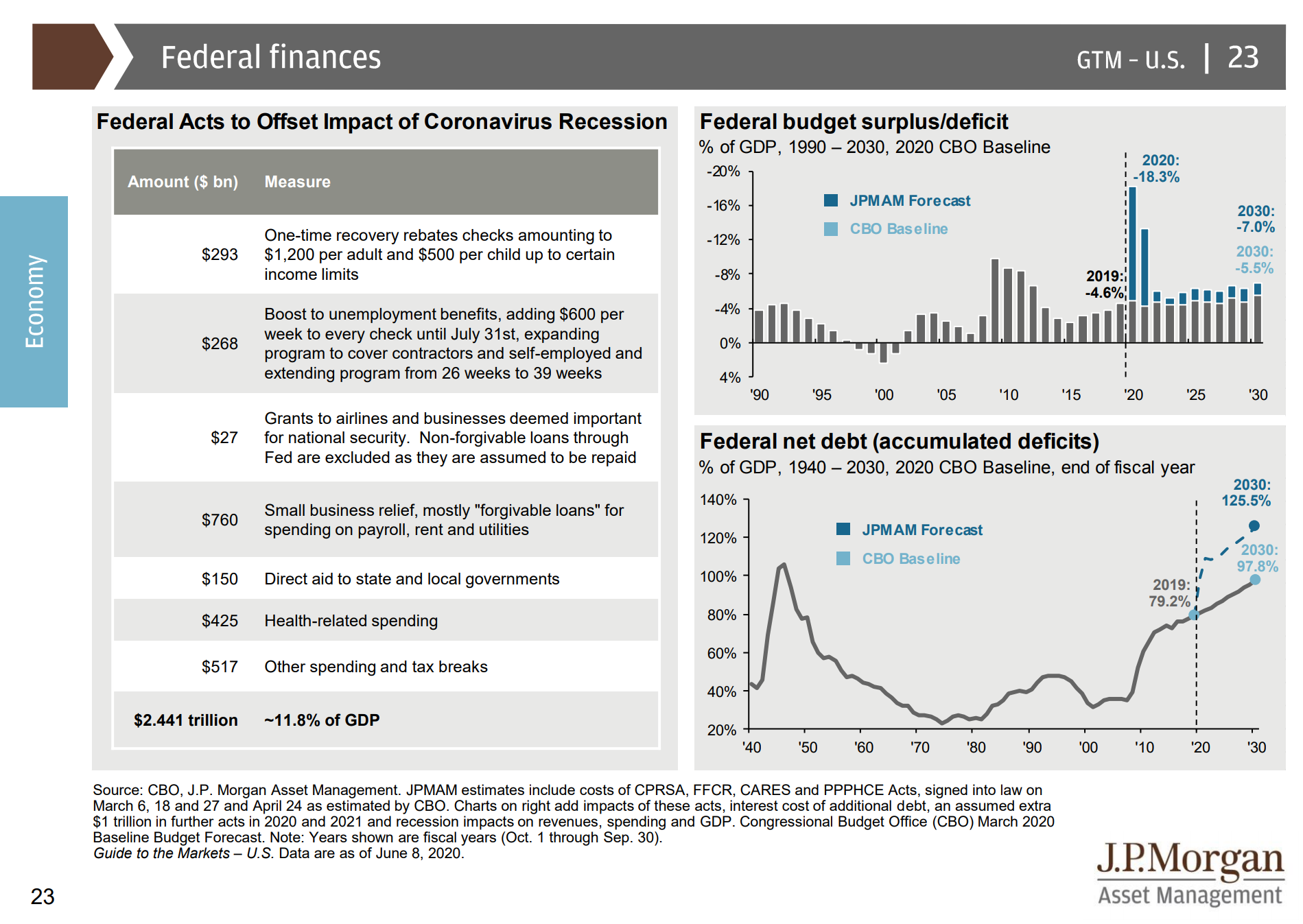 The combination of optimism over economic improvements from horrific to awful plus the flood of money from the Fed and Federal Government has encouraged investors to jump back into the market with both feet, driving the S&P up 25% from the lows in March and back to flat for the year: 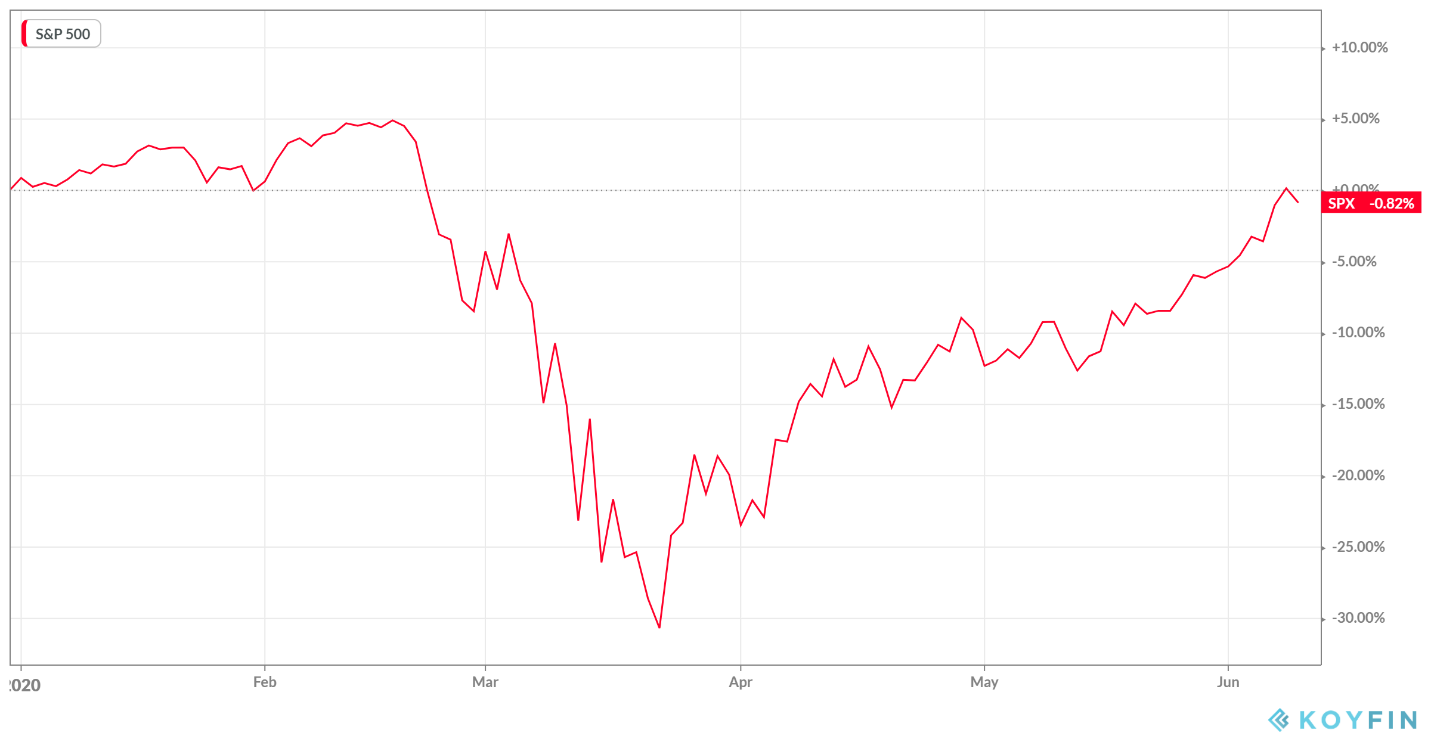 While we are cheering for the rally as much as anyone else, we are simply worried that it is untethered from actual reality.  As of yesterday, the S&P is trading at 22x forward earnings (far above its long term average of 16x earnings)… 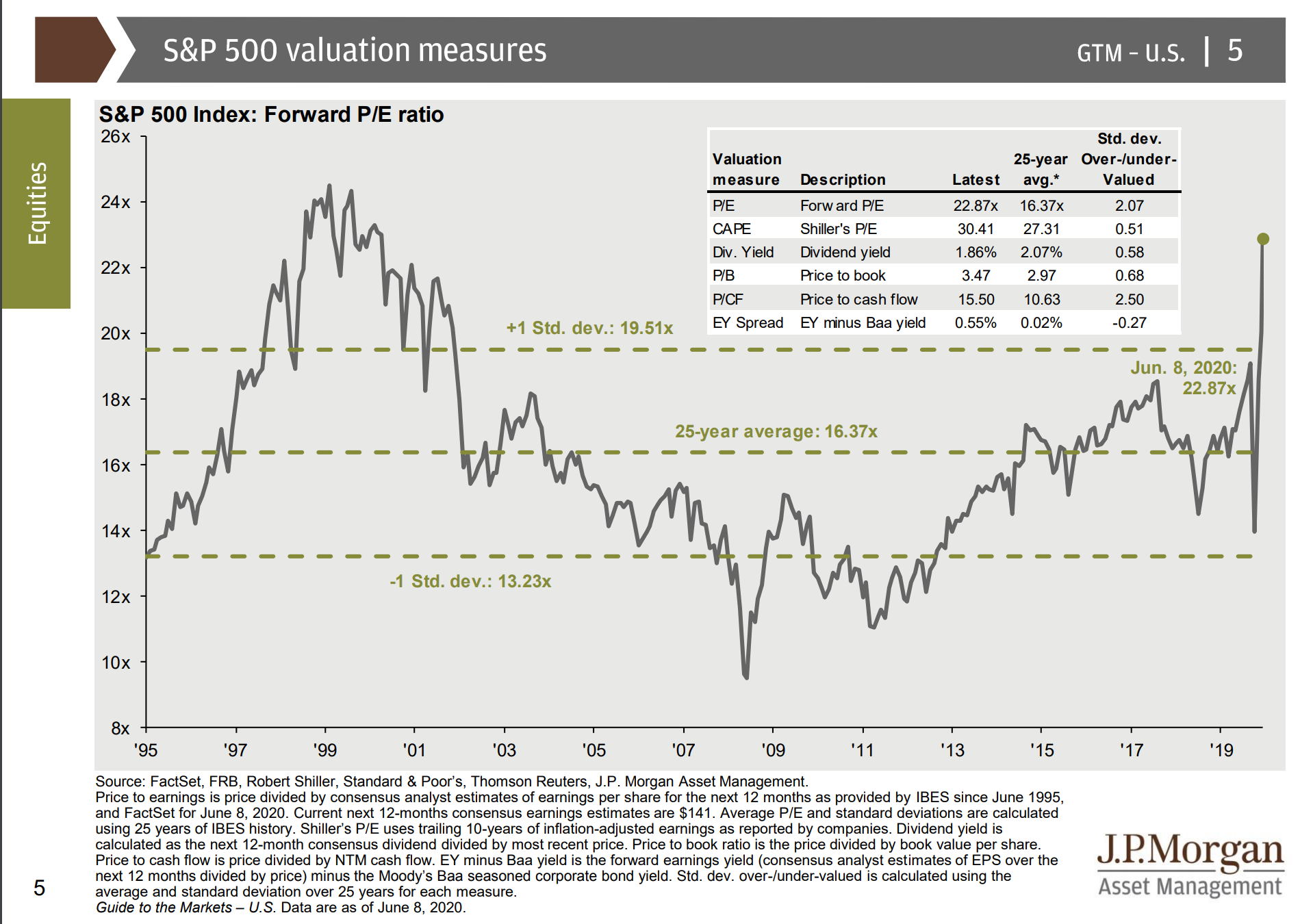 Which is a problem when forward earnings are still a little challenged: 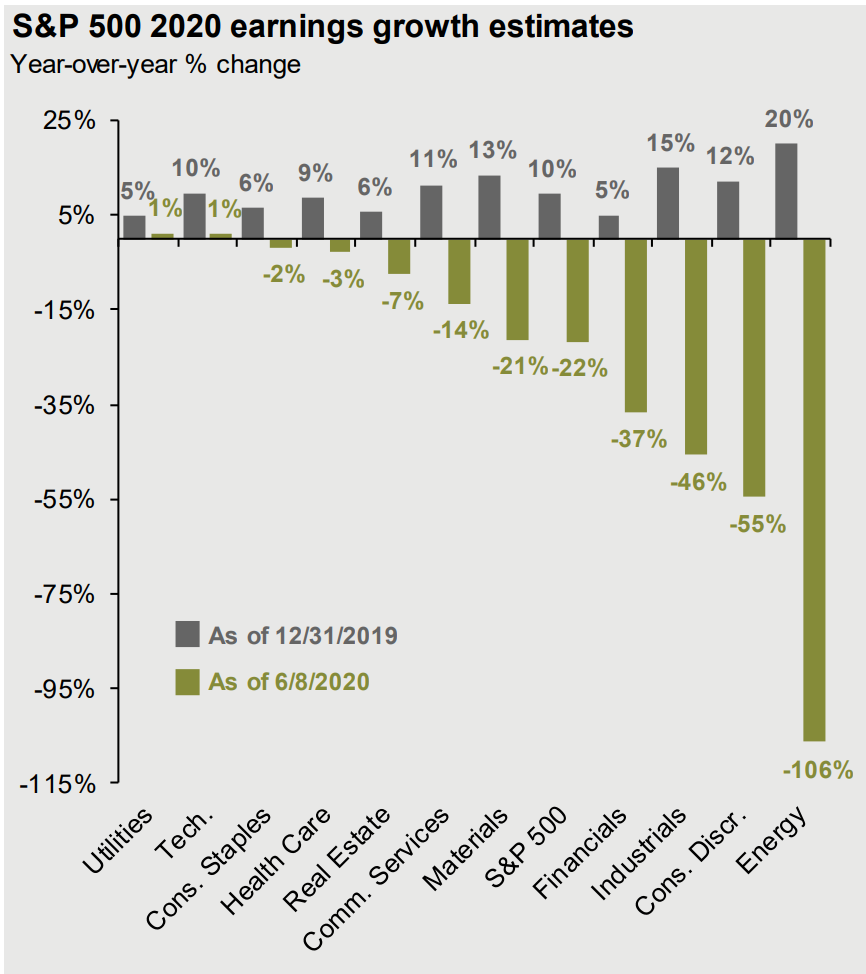 While stocks appear to be extended, the challenge is where to allocate portfolios presently.  And, even the great minds at JP Morgan revert back to the ‘boring’—and oft preached by Meridian—advice that, even now, asset allocation matters.  Bonds are great diversifiers—using them appropriately within a cohesive investment strategy is an extremely prudent way of navigating turmoil.  The top chart of the graphic below uses the example of 2008—the portfolios that utilized bonds (the 40% bond portfolio is in light blue, the 60% bond portfolio is in dark blue) recovered from the market downturn faster as they just didn’t fall as hard.  And, the bottom chart shows that over the last 20 year market cycle from 1999 to 2019, the diversified portfolios returned around 5.5% versus the S&P 500 return of around 6%, so not much return was sacrificed for the smoother ride: 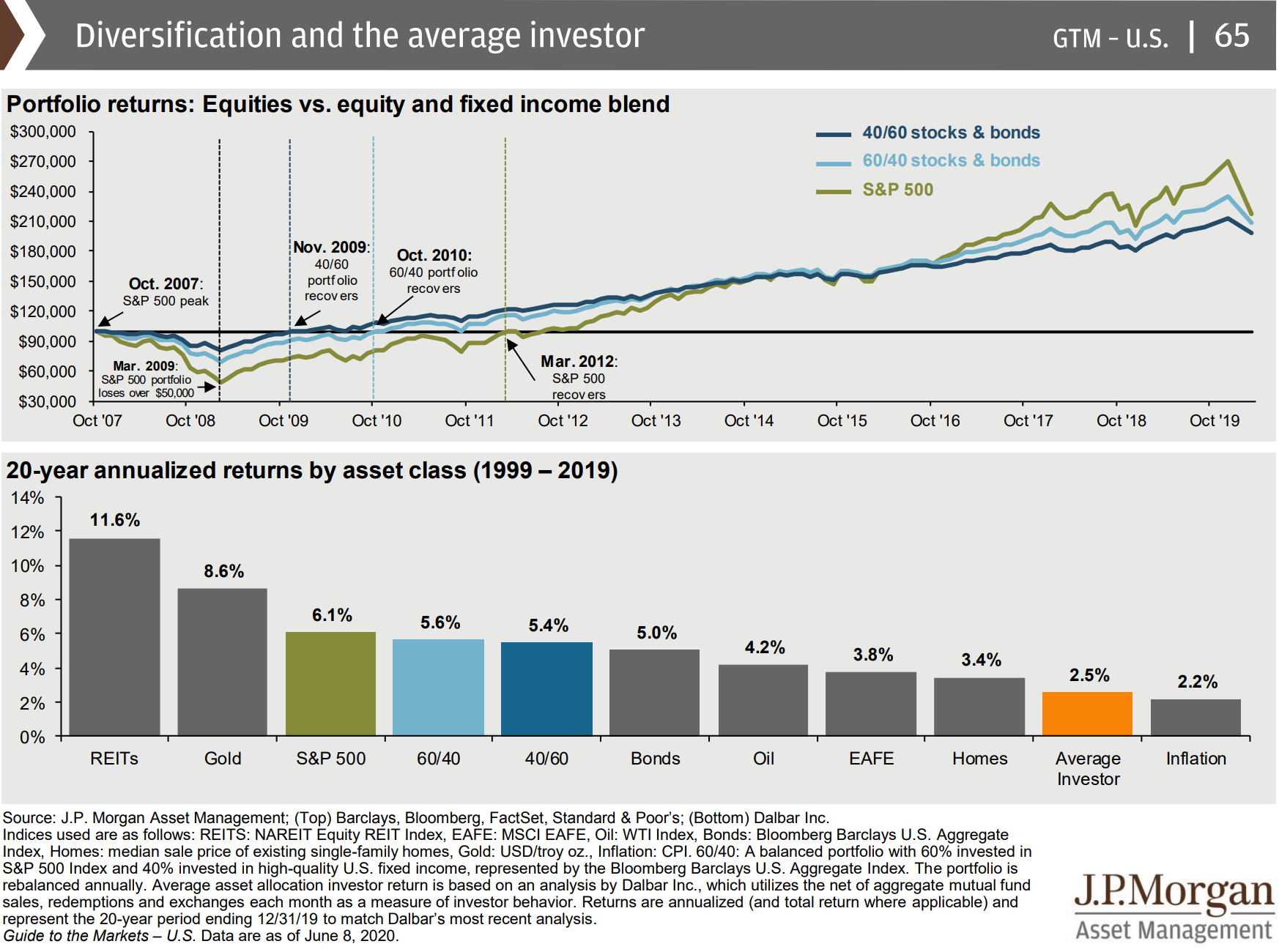 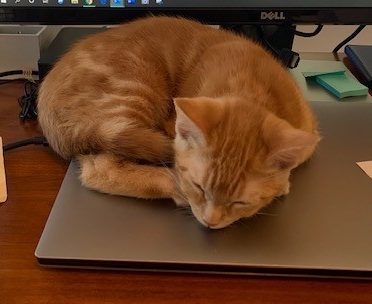 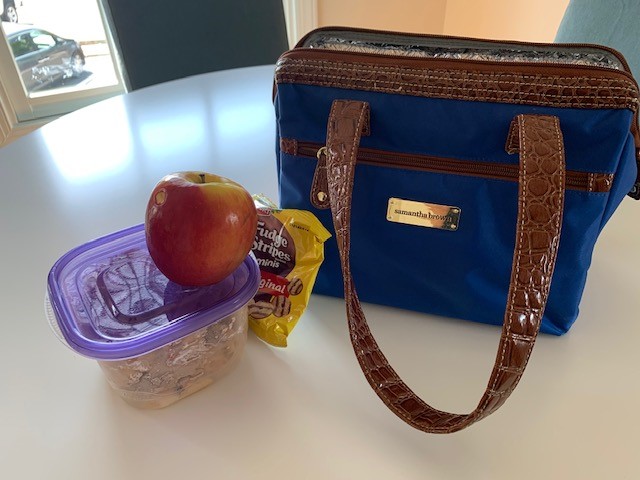 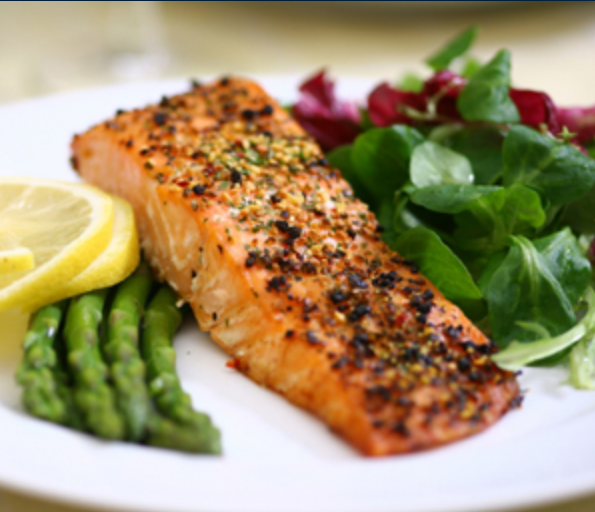