The theme of things increasing seems to be all around us.  The temperature is rising, the hours in the day are getting longer (yay!), and the number of fowls in the Irving family are continuing to grow…

In the financial and economic world, equity markets are hitting all time highs and on Friday the U.S. Labor Department reported 916,000 jobs were added in March.  However, there is a lot of discussion surrounding expectations of other types of increases that don’t tend to give the warm and fuzzies.  Nathan mentioned the most recent possible tax increases in his last blog .  Most notably there is a lot of concern and buzz around expectations for increasing inflation and interest rates.

Since the 1970’s inflation has continued to decrease and has remained below 2% since 2010. 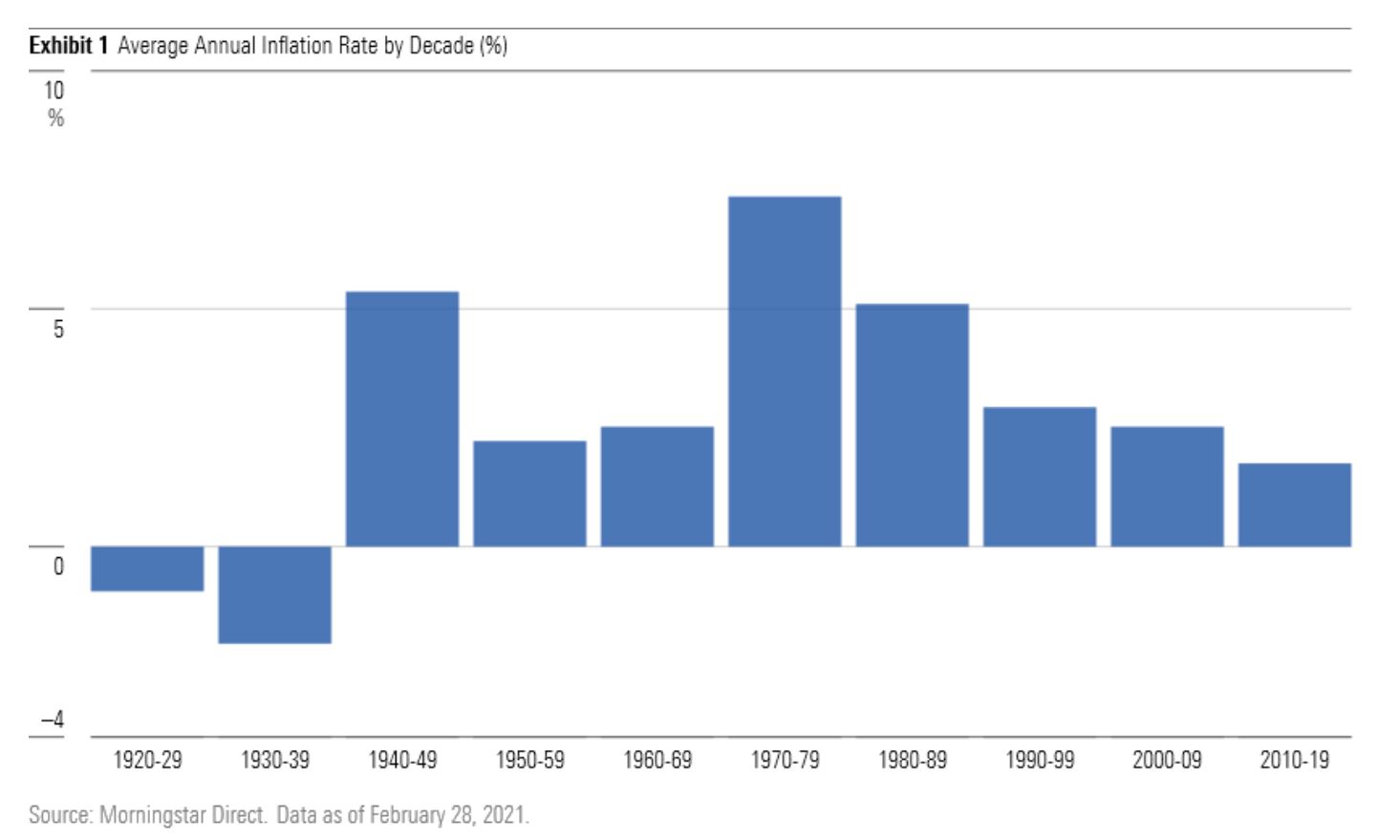 This leaves many to question, can inflation continue to remain this low?

There are several factors at play that could mean inflation could eventually rise.

Markets tend to price in what they foresee what will happen in the future and have already priced in possible future inflation in bond markets. 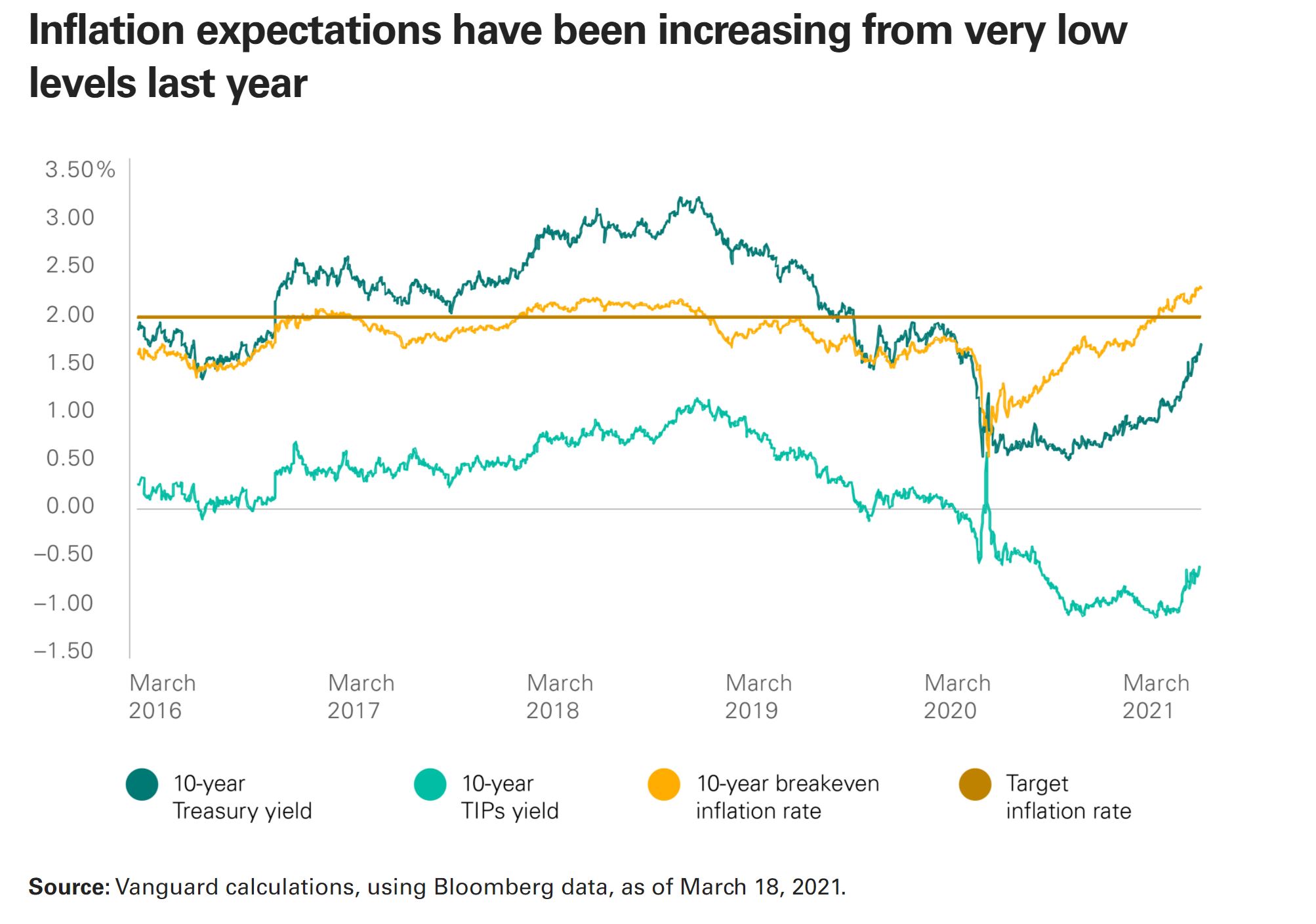 However, there are also very valid reasons to believe it could stay low.

Jerome Powell also was noted as saying in the last month “[t]he economy is a long way from our employment and inflation goals, and it is likely to take some time for substantial further progress to be achieved.”

Interestingly, over the past few decades, after recessions, prices of goods and services as measured by the Core Consumer Price Index have tended to go down the couple of years following the recession, increase, and then over time stabilize. 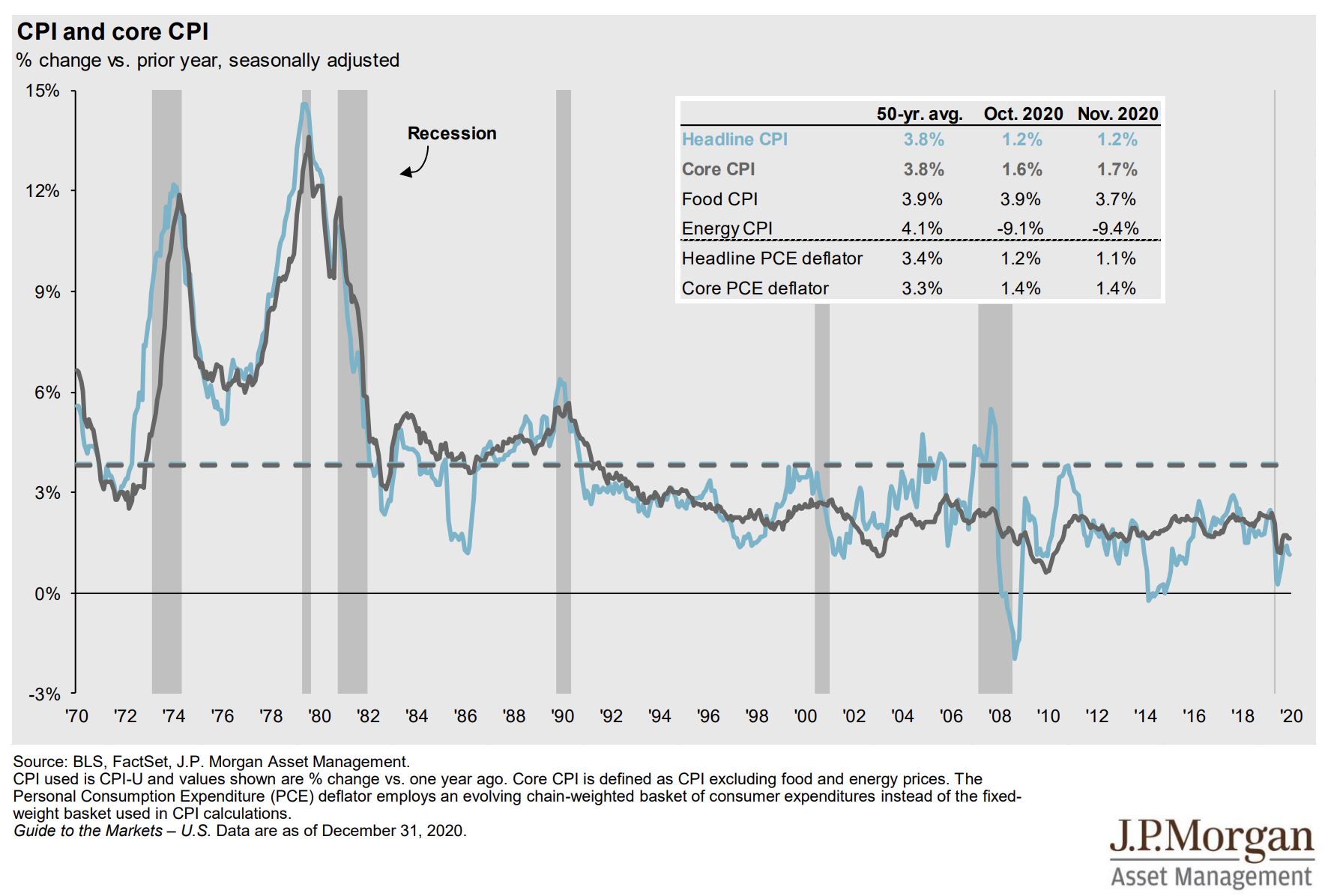 Interest rates have tended to move on a similar path.  They tend to go down immediately following a recession, with bouts of sustained inflation, and shorter bouts of incremental increases.

Recently investors’ eyes have been turned to the effect of inflation speculations on bond prices, which brings into light the relation of expected inflation and interest rates.

The chart below demonstrates an interesting positive correlation between inflation over the previous year and U.S. Treasury interest rates. 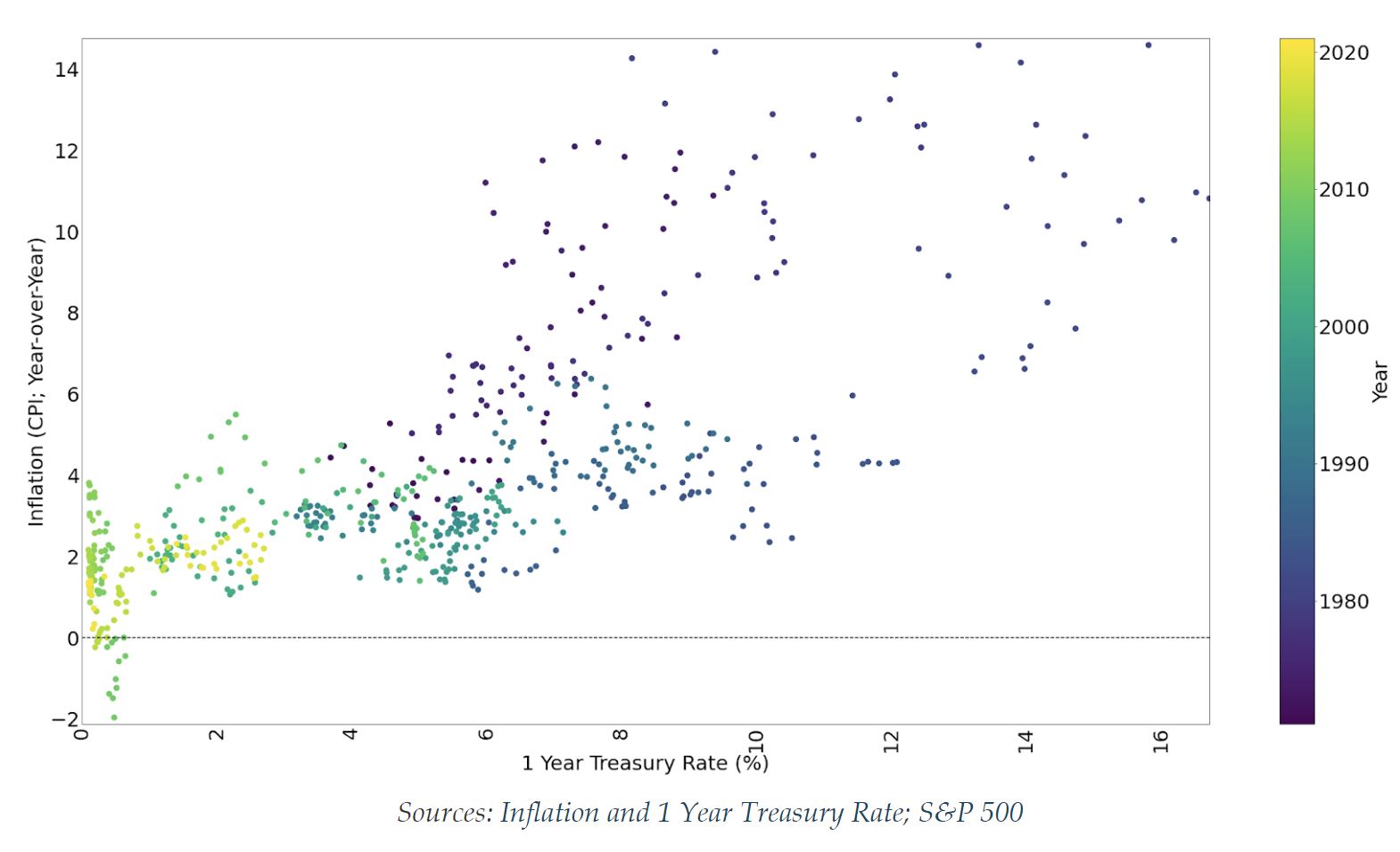 In the early 19th century, Irving Fisher confounded his theory that observed rates reflect expected inflation, which we can interpret that investors integrate inflation expectations and adjust their demand for certain type of investments – most notably with bonds.  If a dollar today will buy significantly less than a dollar will in the future, investors expect to be paid more to “wait and be patient”.  We are seeing this currently in the bond market — prices of bonds decrease as a discount to buyers who could buy other bonds paying a slighter higher interest rate than what the rates were previously.

However, a properly constructed portfolio integrating goals, timelines, and risk tolerance will be able to help navigate any temporary price volatility that may be felt in both the bond and equity markets. Within well managed bond funds that are owning a “bucket” of bonds with varying dates of maturity, price volatility tends to even out over time as lower interest-bearing bonds mature or are sold and higher interest paying bonds are acquired within the fund.  This means that for long-term investors, short term and temporary fluctuation in bond prices due to inflation worries should have a minimal impact on the portfolio.

Within equity markets, ensuring allocation among various asset classes, not just the ones that have tended to do well in the past (large U.S. growth, I’m talking to you) and can help alleviate inflationary pressures on a portfolio. And while we don’t know exactly where inflation and interest rates will go, we continue to watch the economic data, monetary and fiscal decisions / policies, remain nimble, continue encourage broad diversification, and regular review of your overall plan.

If you have questions or would like to discuss how we can help you navigate through the current environment, we would love to have a chat!