I think I can speak for all of us when I say that I’m tired of hearing about Brexit; and reading and writing about it! But, as a founder of an investment firm and an avid golf fan, I couldn’t help but notice the effect that Brexit had on The Champion Golfer of the Year, Henrik Stenson. For you non-golf nerds, Stenson won the “British Open” about 10 days ago (his first major championship). But, don’t call it the British Open around a golf purist. He or she will quickly correct you and say that it’s called The Open Championship and the winner is referred to The Champion Golfer of the Year. If you can say both with a British accent, then it sounds that much more official!

For whatever it’s worth, Stenson is an extremely likeable Swede who out-dueled Phil Mickelson in an incredible and historic final round. Stenson tied the record for lowest round in a major with a 63, and Mickelson shot an also-amazing 65 in a losing effort. The third place finisher was 11 SHOTS behind Mickelson. In almost any other year, Phil would have been Champion Golfer of the Year by a longshot.

The British pound’s de-valuation against the dollar caused Stenson (a Florida resident) to actually win less than last year’s champion, Zach Johnson. This is despite the fact that the winner’s take went up from 1.15 million pounds last year to 1.175 million pound this year. Stenson’s net result in U.S. dollars was $1.556 million, whereas Johnson’s net take last year was $1.8 million. We shouldn’t feel too sorry for Stenson, however. According to Golf Channel, Stenson’s career earnings on the PGA and European Tours total $24.2 million and €23.5 million respectively. I doubt he’s overly concerned with the lower conversion rate!

Currency changes, while very hard to predict, are something that we as investors should keep in mind when looking at our portfolios. As U.S. investors, our returns can be effected both positively and negatively by currency swings overseas. Last year for example, many U.S. investors were hurt by their holdings in Europe, because the dollar increased significantly vs. other currencies. The actual performance of the MSCI EAFE (Europe, Australasia, and Far East) index in 2015 was -0.81%, but many U.S. investors experienced greater losses as the value of the U.S. dollar rose.

Ignoring international investing has actually been the “right” move over the last few years, as those markets have trailed U.S. returns. However, we believe that over the long term, staying invested overseas in some capacity remains the best choice. The chart below is a good example of the longer term trends. 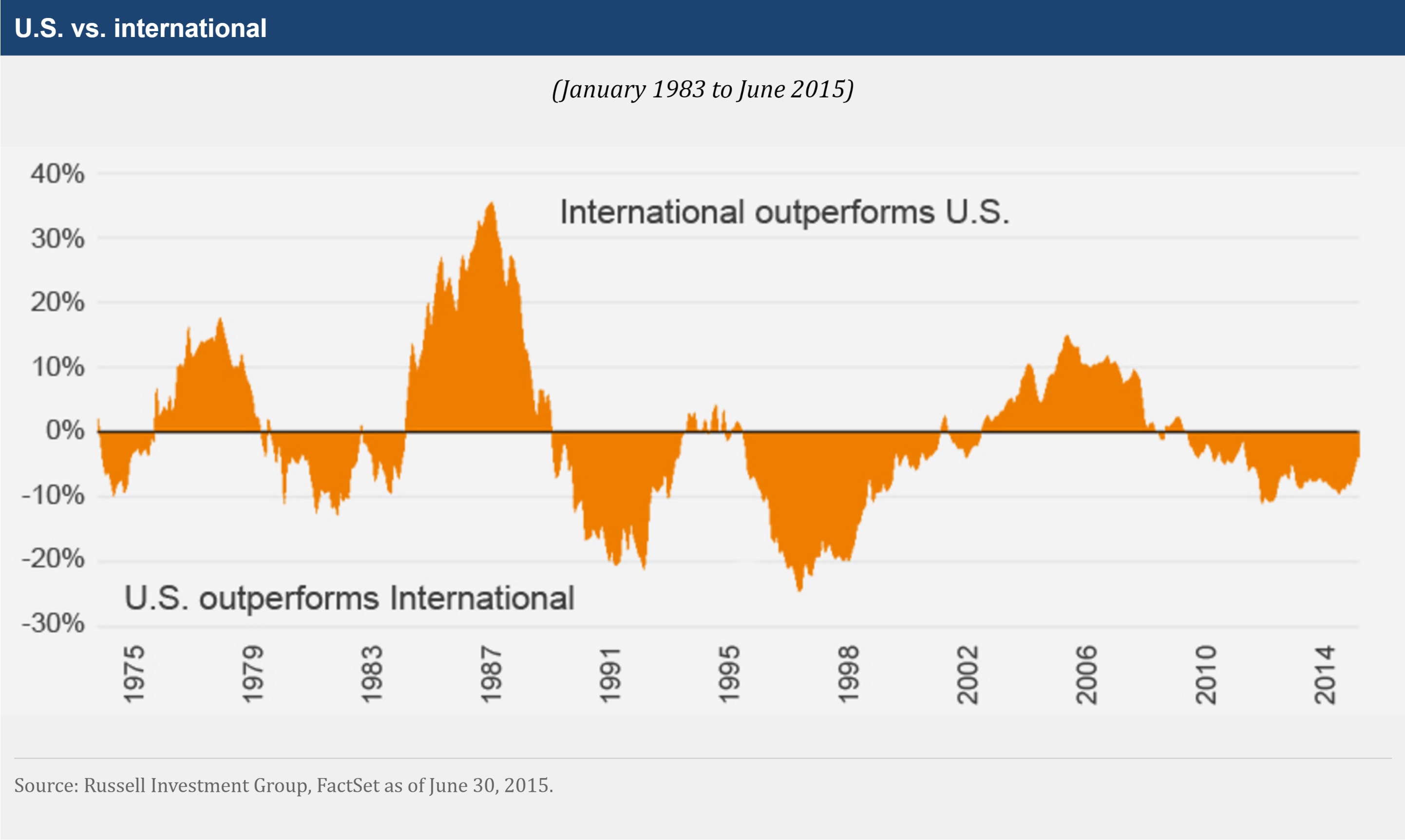 If you plan on being The Champion Golfer of the Year anytime soon, you may want to take a look at the currency conversion rates to make sure you time it right!