Ryan Lochte – Not Robbed at Gunpoint in Rio

I will admit to using Ryan Lochte’s name as somewhat of an attention grabber. I will also admit to following his “story” at the Olympics in Rio quite closely. He is certainly the villain du jour for the moment and it seems deservedly so. If you aren’t aware (and I don’t know how you couldn’t be!), Ryan Lochte is a decorated US swimmer who fabricated/significantly embellished a story about being robbed at gunpoint in Rio. The reality is still somewhat unclear, but it looks as though he and his buddies were drunk, vandalized a street side shop, and got confronted by the shop owner with a gun.

Lochte’s second (and arguably worse) mistake was not being clear and transparent with his explanation and subsequent semi-apology. Personally, I think he would have been much better off to have come completely clean and ask for forgiveness. Had he done this, he may have saved the probable millions of dollars in endorsements that recently disappeared after the incident.

Being clear and transparent is one of the core beliefs that we have at our firm. Certainly, I am not saying we need to go so far as to apologize for charging for our expertise. But, I am saying that clients should be made aware of all fees they are paying, as well as how and when they are being charged.

For many new clients at our firm, ignorance has been bliss. By that I mean, they have not seen the fees they have been charged, and/or don’t know they are even there. This may not be completely intentional by other money managers and planners, but I do think it can be a bit misleading.

For example, one popular structure in our industry is called “fee based.” This type of fee is often quoted as a percentage of the value of the account, and a common amount is about 1.2% annually. That all seems fine on the surface. However, the mutual funds that are sometimes used as investments in these types of accounts also have annual management fees. Often, these can add 1% or more to the overall fee amount, and the fees are not itemized (meaning they not shown) on any monthly, quarterly, or annual statement. By the way, “fee based” means that the advisor/broker/firm can also receive a portion of the mutual funds’ underlying management fee.

The chart below gives you a good idea of just how big an effect fees can have on an investment: 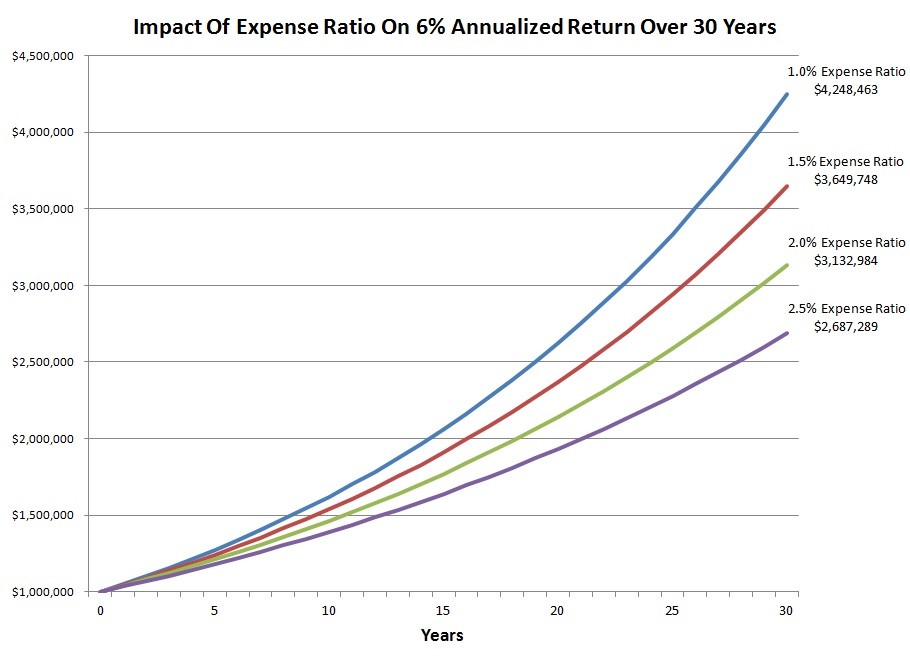 One alternative fee structure that we believe is best is called “fee only.” This means that an advisor/broker/frim can only receive compensation (fees) from their clients. They cannot share in the fees charged by other funds, insurance companies, or other types of investments. So, if you are quoted a 1.2% annual management fee, then that is all your advisor is receiving for compensation. He or she does not receive any kickbacks or additional fees for pushing a particular type of investment. This is not to say that underlying fees don’t exist, but there is no incentive to the advisor to do anything other than make the account grow in value.

Fees certainly aren’t the only factor in an investment’s performance, but it definitely pays to pay attention to what you are paying.