At Meridian, we are starting to hear from our clients and friends about how the 2018 Tax Cuts and Jobs Act is actually impacting their returns.  For the most part, we’ve not heard a lot of favorable news.  For some, refunds have been slightly improved, but many folks were sharply surprised that many of their itemized deductions simply don’t matter anymore with the expanded standard deduction of $12,000 per person.   The Tax Foundation estimates that over 90% of Americans will now use the standard deduction: 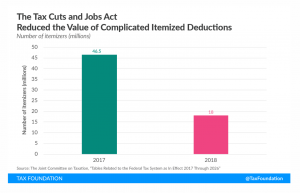 For charities around America, this is scary news.  While most of us give to charities that we care about because we want to give, the charitable tax deduction is a huge incentive for making a larger donation.  With that removed, the Giving Foundation estimates that charitable contributions could decline up to $21 billion, or roughly 4%. 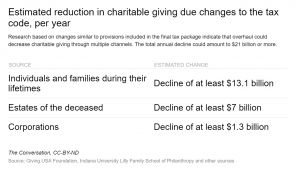 The Tax Code leaves one major gift for charities and donors intact:  The Qualified Charitable Donation (“QCD”).  A QCD allows a donor who is over the age of 70 ½ to gift up to $100,000 to a qualified charity from their IRA.  This distribution is not included in the donor’s income as a normal IRA distribution would be.  In a sense, the donor receives a tax credit for the gift as income that would have been 100% reportable as income is erased and excluded entirely.  The QCD also counts towards and can completely satisfy a donor’s required minimum distribution (RMD) for the year.

In order to properly do a QCD, there are a few things to keep in mind:

For IRA owners over 70 ½, the Qualified Charitable Donation is a powerful tool to satisfy charitable giving desires while also helping to save money on taxes!