Last week, my son was fortunate enough to get to practice with two Washington Capitals hockey players at the Capitals’ practice facility in Arlington. The entire Piedmont Predators under 10 group was able to participate, and I think it’s safe to say they all had a great time (and were a little starstruck!). As a fan of the team myself, it was pretty neat to watch my son doing drills with two Capitals players.

The kids went through a relatively normal practice routine, but of course the enjoyment was ramped up since two NHL pros were practicing right alongside them. Both Lars Eller and Carl Hagelin were extremely kind and engaging even when they probably didn’t have to be. They both represented their team and sport very well, and I believe were a very positive influence on the kids. It was nice to see such high-profile players carry themselves with a give-back-to-the-sport mentality instead of just going through the motions.

Speaking of positive influences, despite continued highs in the US markets, there are still some positive indicators out there that point to even further growth. Many of our clients are asking if the markets can continue this upward climb. It seems that the lion’s share of experts are predicting continued growth in 2020, but probably not as much as in 2019.

Two key indicators that many economists and investors pay attention to are the US Unemployment Rate and US Wage Growth. The unemployment rate continues to go down and wage growth is steadily increasing (albeit maybe not as much as some would like). If both of these trends continue in 2020, it might be a large part of the reason for continued strong US market performance. 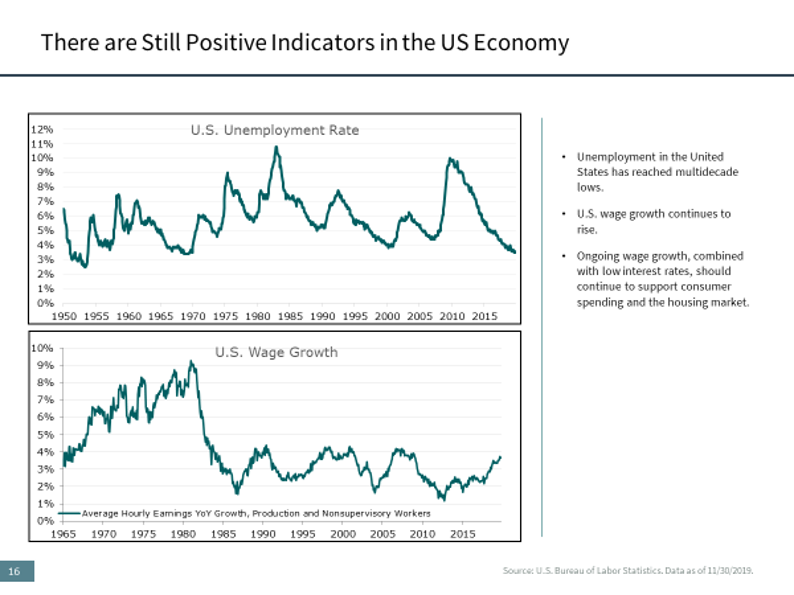 Additionally, other areas of the global markets that have lagged the US markets are poised for a rebound. Many of the central banks around the world have followed a similar accommodative rate reduction policy, and this may allow those markets to enjoy further growth as well.

Much like my son got a chance to learn from NHL professionals, we as investors can look at the same data as other professionals and further fine tune our own skills. Certainly, data cannot perfectly predict the future, and (news flash!) markets can sometimes act irrationally. However, informed decision making should lead to long-term positive results.