Taking it with a Grain of …. Sand

Last week my family and I had the opportunity to escape to the beach in North Carolina, close to where I grew up … pretty lucky timing on our part considering hurricane Isaias’s path!  As any parent knows, vacations with small children aren’t exactly relaxing, but the making of lifetime memories is all worth it.  It was my youngest’s first time at the beach at a mere 10 months old.  His first hour on the beach he spent seeing how much sand he could shovel in his mouth whenever I turned my head — truly getting a “taste” of the beach life.

The week flew by with the days a blur of planning around beach time, pool time, nap time, and food time. The days were so packed that I was both purposefully and inadvertently removed from everything going on in the world…. for the most part.  It is almost nearly impossible to completely turn off all news sources, notifications, and even more impossible to avoid current event topics coming up at the dinner table with extended family.  Outside of conversations surrounding adjusting to life and expectations during the pandemic since this is an election year, inevitably politics would come up in some form or fashion.  The same is true as we have been reaching out to our clients over the last few months.

This is no doubt a sensitive topic and the stakes feel even higher this year for both political parties as we are living in a different environment from what we have experienced in the recent past.  We have heard a lot of questions about the upcoming election, the different scenarios, and our thoughts on portfolio implications.

Predicting political outcomes is not my area of expertise and I will not even attempt to predict which way the election will go in November.  However, what is interesting to look at is the historical data of returns during elections.  Granted this is less than 100 years of information to go off on, but since 1928 only 4 out of the 23 election years ended in negative S&P 500 returns. 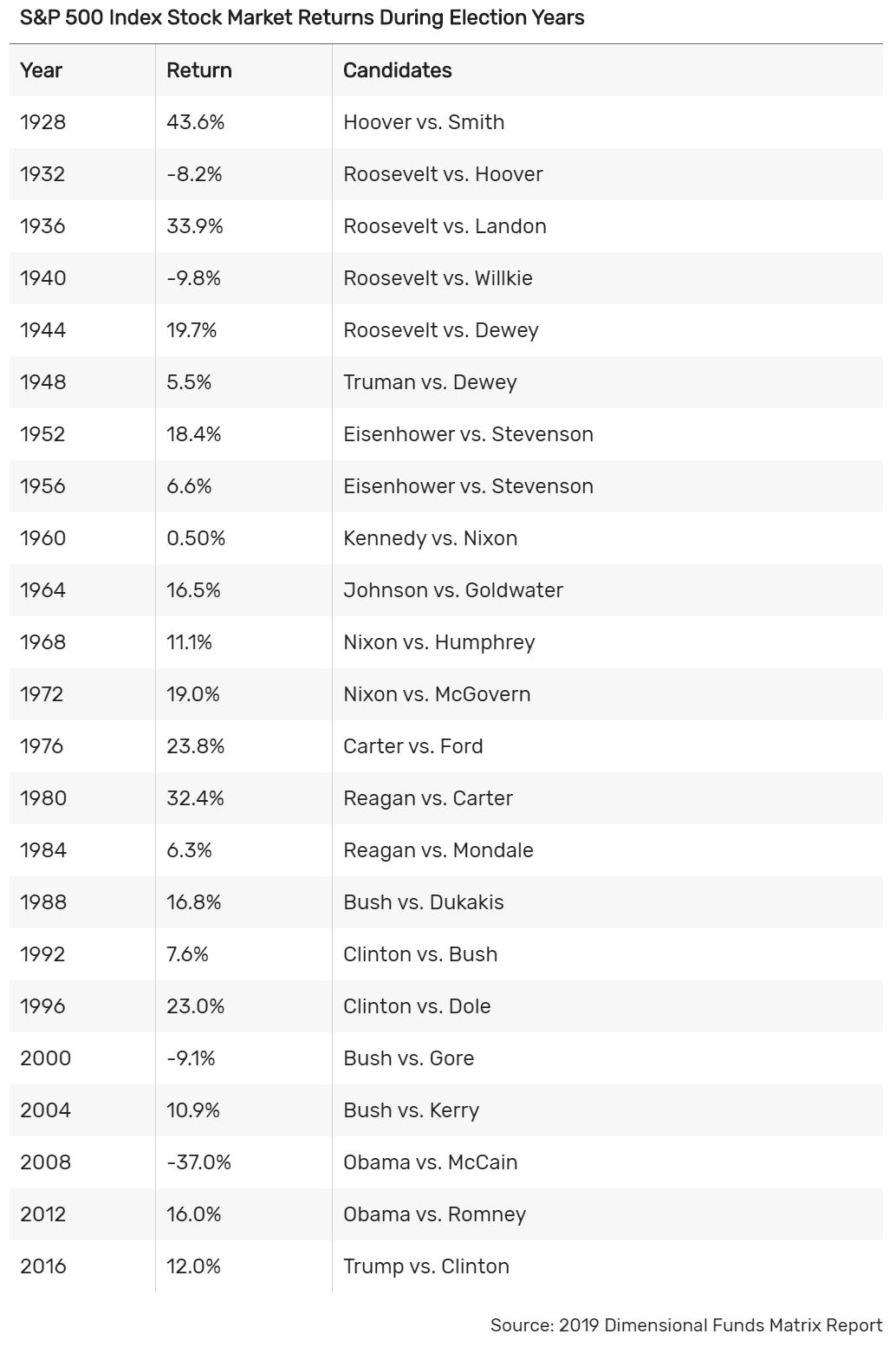 If we look at each presidential term, there is something referred to as the “Presidential Cycle” which points to that the first two years of a presidential term tend to produce below average results in the market and the second two years produce above average results. Typically, the first two years the presidential agenda is working its way through the economy and the market is adjusting to any changes.  General hypothesis is in the second two years we see the results of the “dust settling” in addition to the focus on re-election.  Again, this is all based off historical data and we all know we are currently living through a rare time in history. 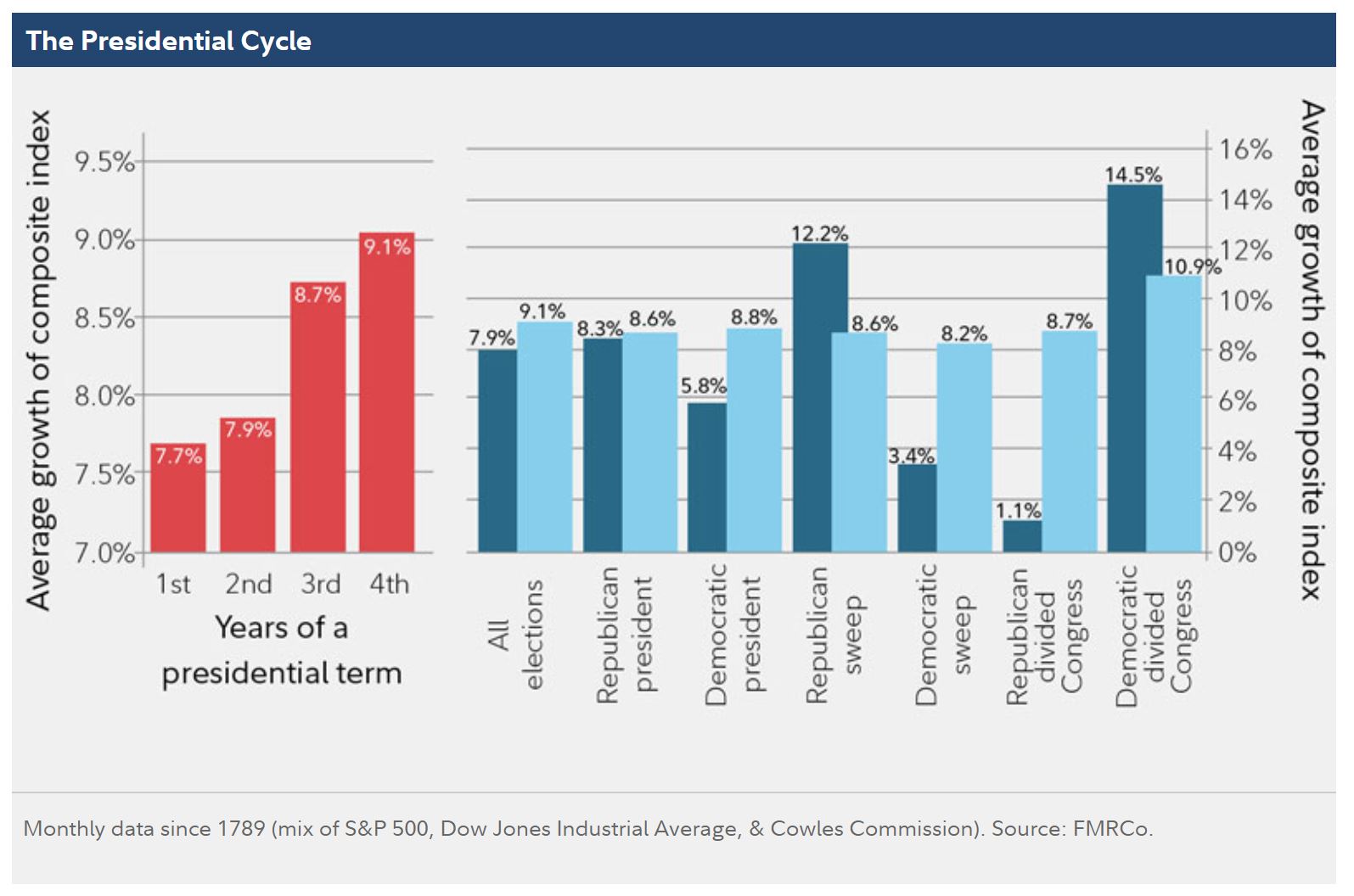 What the chart show is if we look at the full 4-year term, the average returns are so close to one another that it is entirely worth staying invested through the shorter terms of turbulence for an average of a 9.1% return. With that said, it is always important to note that past performance does not guarantee future results.  However, trying to time how the market will react regardless of what happens over the next four years could prove to be futile for long-term results.  If you invested $1,000 in 1938 during the election of Hoover, then you would have $10,000,000 today. 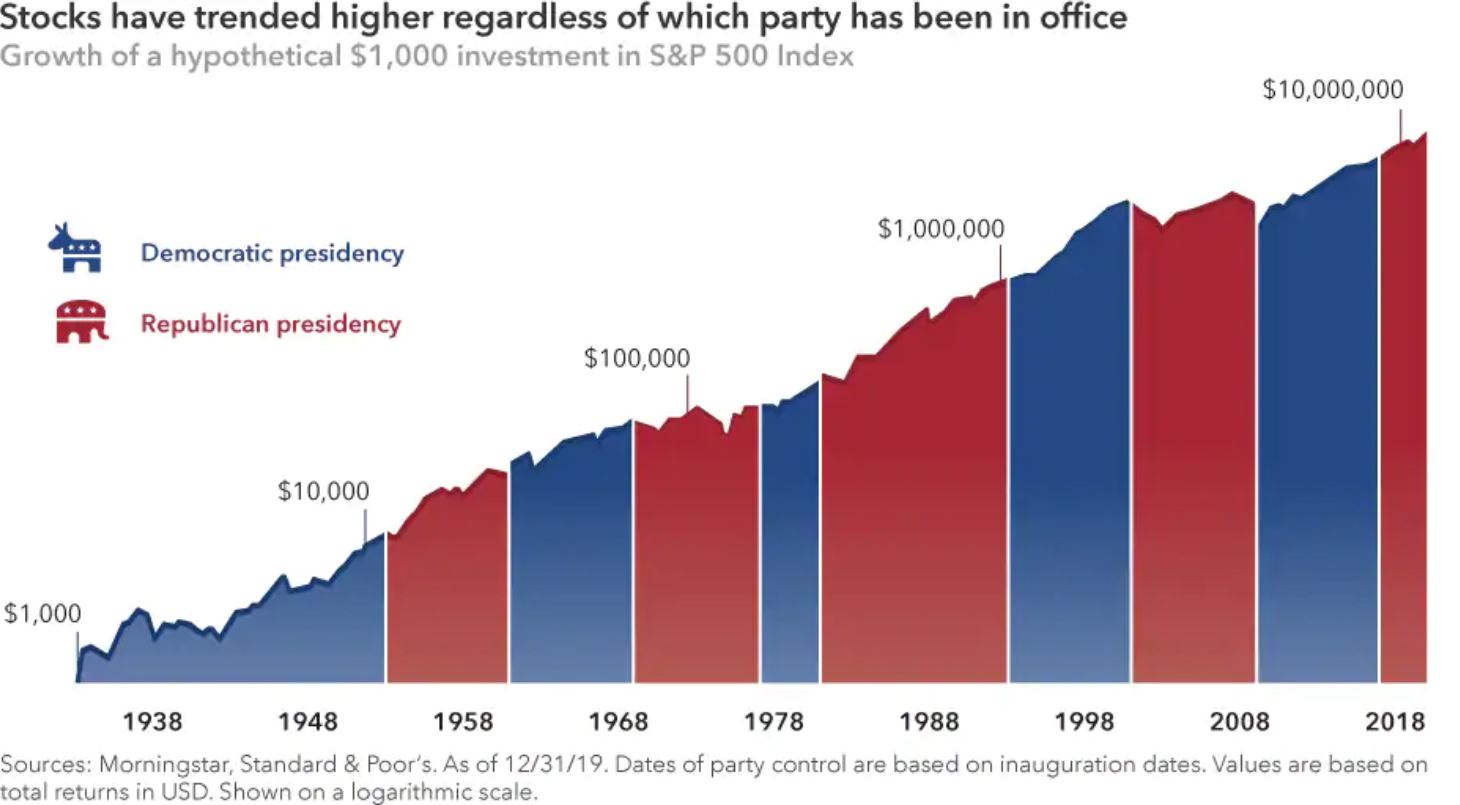 Granted, most investors don’t have a 78 year time horizon and this does not integrate withdrawals from the investment, but the point still rings true.  As uncertain as this year has been and these next few months will more than likely be, there is a lot to be said for looking at the larger picture.  As important as the presidential elections are, as Fidelity’s Director of Global Asset Allocation put it, “the economy and therefore the market is simply bigger than the direction the political winds are blowing.” What we will continue to focus on are the long-term fundamentals and ensuring that appropriate and sufficient diversification are in place to weather short-term bumps.

As election day draws closer, I also think it is important from a prudence perspective to take claims of market prediction purely based on the election results with a grain of salt… or as my son would prefer it, a grain of sand.

Taking it with a Grain of …. Sand