The FIRE is still burning

In the financial world, there has been a lot of recent attention on a movement among the younger generation which magnifies the advice of save early and save often.  The FIRE movement – which stands for Financial Independence Retire Early – is built on the principles of high savings rates early in a career coupled with reduced spending in order to retire 20, 30, or even in extreme cases 40 years earlier than the typical retirement age of 65 or 67.  From a financial planners perspective in order to successfully accomplish this, a serious amount of planning, diligence, and realistic goal setting is required.

For perspective, the below chart shows how much one needs to save to retire at various ages:

It almost feels ironic that during a time of great uncertainty as we are in now,  that the FIRE movement would be gaining even further popularity – particularly since the flames of movement were fanned over the last 11 years in which we experienced the longest bull market in history.   As we all know, a higher allocation of risk in a portfolio should equal out to a higher amount of reward over the long-term, so it’s no surprise that many followers of FIRE realized this, allocated their portfolios aggressively, and enjoyed the ride up over the few years.  And then Covid happened.  With the roller coaster market drop, unemployment rates at their highest levels in decades, the dedication to and the strength of the Financial Independence Retire Early strategy surely had to be strained.

However, after digging more into the nuances of what FIRE really stands for, I was surprise and not surprised at the same time to hear of its resiliency and the current success stories of those following this plan.  The movement focuses on earmarking a year worth of living expenses in savings and increasing personal savings rate to 25x annual expenses, which sounds like an awful lot, but again points to the emphasis on planning.  If an individual pursuing the FIRE lifestyle started this rate of savings prior to March of this year, they were already ahead of the game and in a way predicted the level of savings that the average household feels is safe in a crisis.

The chart below shows the changes in personal savings rates in the United States over the last five years. 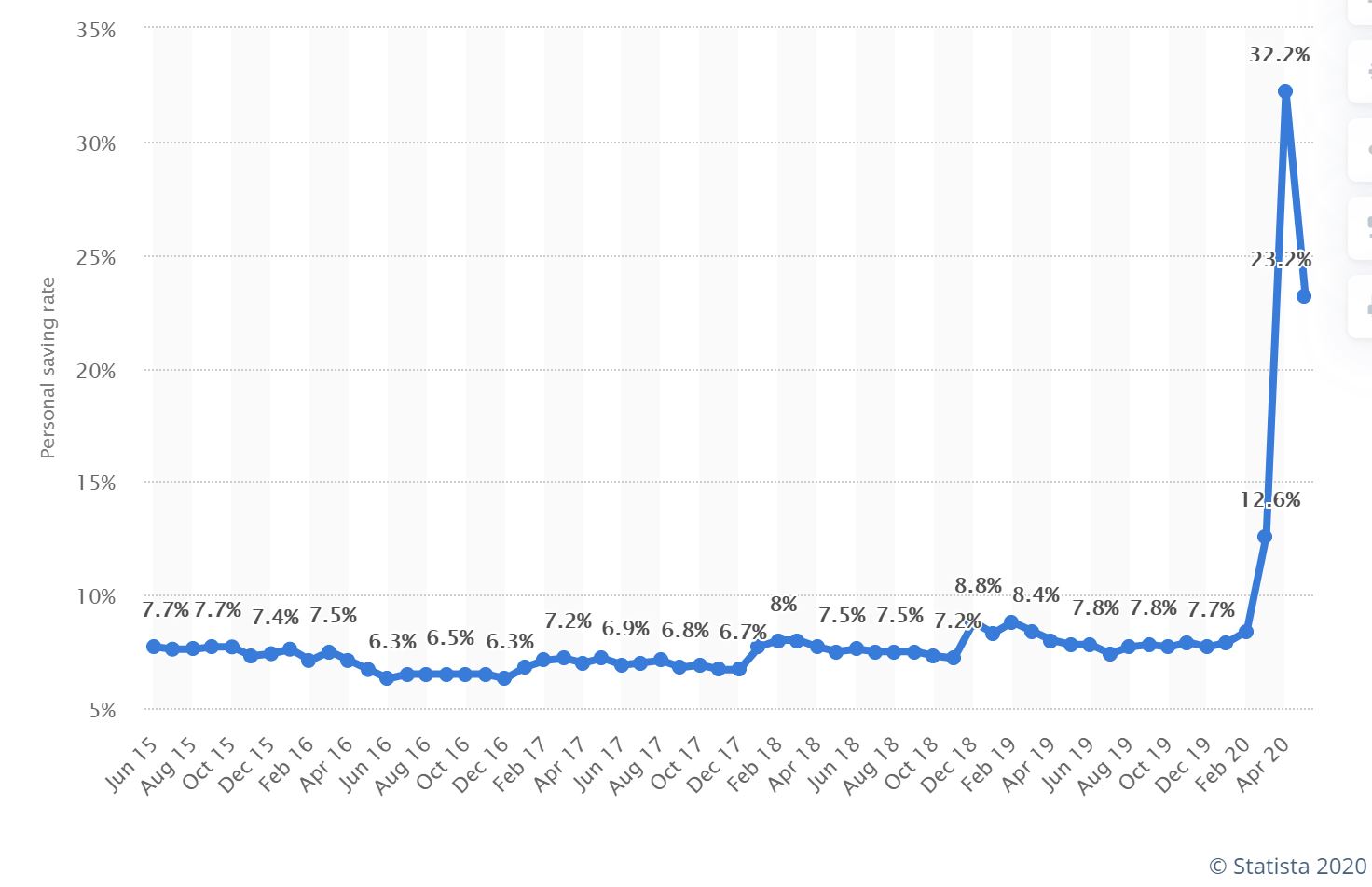 While savings rates are an important component of FIRE, the success of the plan is based around thoughtfully and strategically allocating expenditures, as well as building a prudent investment portfolio and planning on a sustainable drawdown rate.  The 25x savings rate mentioned above is based around the 4% drawdown rule of thumb; however this is based on a 30 year retirement timeline.  Extending this retirement timeline requires a combination of reducing the drawdown percentage (which aligns with reducing expenses) and investing for the long long term.  When the market momentarily lost almost 30% in March, FIRE followers who had enough savings and a diversified portfolio didn’t panic.  The plan was already built around a long time horizon and by understanding historic returns, they knew their investments would recover.  In fact their investing principles remained very much in line with those taking a more traditional path – diversify, reduce costs where possible, and take advantage of opportunities in the market while prices were low.

I, like many others familiarizing themselves with the concept of FIRE, was apprehensive about the entire movement.  To be honest, it initially came off as “frugality on steroids in order to escape the chains of the corporate 9-5”.  However, after more research, I think there are many components anyone, no matter their course or age can implement.  A focus on living and spending mindfully, saving early and often, spending the greater portion your life performing fulfilling work whether that is in the traditional or non-traditional sense, and most importantly planning and frequently revisiting that plan to accommodate unexpected changes.

It is not surprising to me that the movement has gained further steam over the last few months.  The focus on preparedness even in adverse time and financial independence has been more critical now for many individuals.  Nontraditional work settings or the opportunities to create your own work have redefined what a typical job looks like now and may look like in the future.

When so much seems out of our control, the one thing we can control is the actions we take.  So what better time to light a “fire” underneath ourselves and put a plan together whether it is traditional or nontraditional?

The FIRE is still burning