Happy New Year to you and your loved ones! I was waiting for the markets to have an uptick before posting our first blog of 2019 😊. Here’s hoping the markets stay that way this year (or till I finish writing this at least!).

My family’s Christmas and New Year’s events were a lot of fun. Thanks for asking! We had almost all sides of our family either come visit or were visited, so it was good to catch up, eat, drink, give and receive. Our kids are at a very fun age for Christmas in particular (9,7, & 4), so their level of excitement prior to Christmas morning was at an 11. The highlight for me was watching my 9-year-old boy discover an off-road go kart that Santa delivered to the garage. Santa was fortunate enough to find a used one on Craigslist back in November and was hard-pressed to keep it hidden till Christmas morning.

I suspect this might be the last year of Santa-belief for Coleman, as he is starting to ask questions that are hard to answer. About the kart:

Dad: “The reindeer probably dinged it up a bit in transport.”

Coleman: “Why is it taking so long to start?”

Dad: “Santa left me specific instructions that said it might take a while to start, and you may have to let it warm up for a while in cold weather. The note also said that I was supposed to teach you how to drive it, before you drive it alone.”

Coleman (after 5 seconds of instruction): “Can I drive it now???”

Much like Coleman in the picture above, most of our portfolios were covered in mud after a brutal end to 2018. All things stocks took a major hit, and the S&P suffered its worst December since 1929 (!). As I mentioned in a previous post, the negative attention-grabbing headlines are becoming more frequent. The one I’ve seen (and been asked about) most recently is something along the lines of, ‘Likelihood of Recession on the Rise.”

That’s actually a true statement, but if you look at the chart below from Federal Reserve Bank of New York, you will see the bigger picture. The likelihood of a recession in the next 12 months moved from about 10% one year ago to 14.9%. 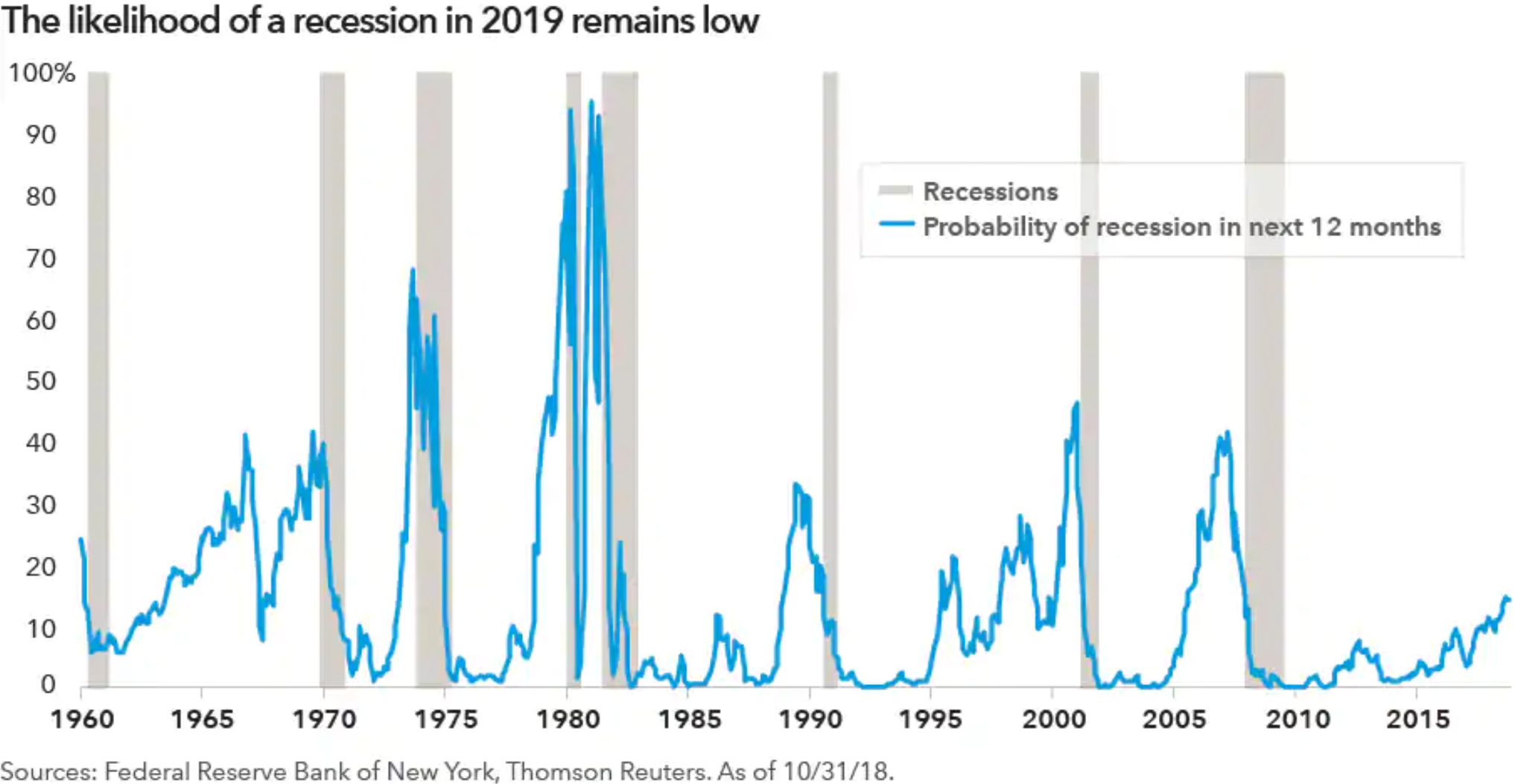 From Capital Group: “The same model had exceeded 30% before each of the last seven recessions.”

“We have not yet seen the excesses that would be red flags for an imminent recession,” says Capital Group economist Jared Franz. “I expect to see an economy that is still positive in 2019 but growing a bit slower, and the risk of recession will rise throughout the year.”

I think the bottom line is that there will likely still be global growth in 2019. And, slow growth might be a good thing in order to avoid any prolonged downturn in the markets. We are a long way from 30% in the chart above, so it might be best to wipe the mud off our goggles and stay invested in a well-diversified portfolio for 2019.