I realize this blog title could pertain to a lot of things going on in our world right now. In fact, it probably could be reversed to, ‘Insanity Now, Serenity Later.’ At least, I certainly hope there’s some serenity later for all of our sakes! In this case, I am referring to income tax rates and was looking for an excuse to wedge in a Seinfeld reference. https://youtu.be/MJVIX-4OyT0 . Might it be a good idea to intentionally take more income now (this year) while taxes are low (serene?) or wait until taxes are potentially higher (insane?) later. I know, it’s a bit of a stretch of a reference. 😊

Most people agree that we are in a historically low income tax environment. And, if you are someone with tax-deferred accounts (IRAs, 401ks, etc.) and over the age of 59.5, you likely have some decisions to make prior to the end of the year. While the RMD (Required Minimum Distribution) requirements have been waived for this year, it might be worth considering taking a distribution anyway. 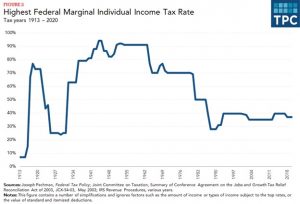 Like many things in our business, this is an educated guess on the direction of income taxes. I could be completely wrong, and the tax rates could decrease from here. However, at the very least, you may be unnecessarily kicking the can down the road if you are not taking your RMD (for those over age 70.5, and more recently age 72).

Take a look at what your taxable income will likely be for 2020 and see how much you could take to “top out” your tax bracket https://taxfoundation.org/2020-tax-brackets/#brackets.

As a quick example, if you are married and filing jointly and expect to make $120,000 in income, you could take another $51,050 in income (in the form of IRA withdrawals and/or ROTH conversions) at the 22% rate. That may be a pretty good deal if you/we expect income tax rates to be higher (insanity?) later.

Speaking of insanity, one might think it’s insane to allow your son to shoot a flamethrower while visiting your buddy’s house. I will defend myself by saying it was either serenity right then (so we could watch football) or insanity later, because he would have annoyed us so much for not letting him do it!