This election season has been a challenge, driving Crush to binge on chips… 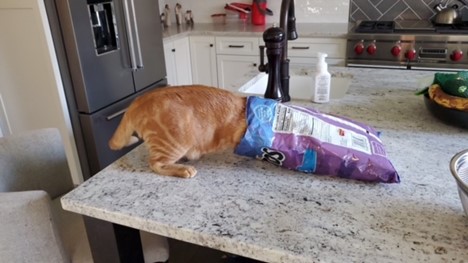 However, with the election (yet perhaps not the end of the debate) behind us, hopefully we can start to mend fences and live in peace with each other. 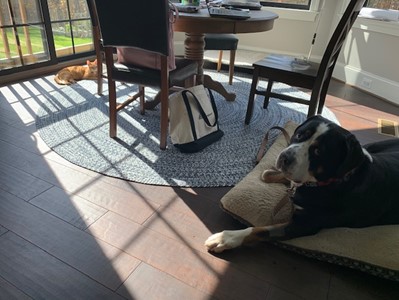 With the market soaring to all time highs today on the news that we most likely have a 46th president (with a divided government) and Pfizer’s announcement of a successful vaccine with 90% efficacy, we are answering a lot of questions about what happens now…

It seems investors like the idea of a split government, which typically leads to more muted and moderate policy making—the S&P 500 just had its best election week performance since the Great Depression, ending election week up 7.36%: 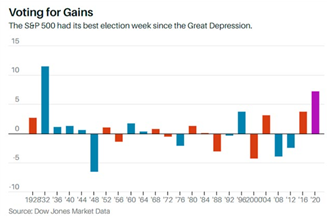 Edgar R. Fielder once wrote, “He who lives by the crystal ball soon learns to eat ground glass”.  So, while we are fully aware of our lack of ability to forecast the future with any certainty, here are a few quick post-election day observations on a few key policy areas from one of our favorite economists, Dr. David Kelly of JP Morgan Asset Management:

From a macroeconomic standpoint, a follow-on fiscal package has been one of the most eagerly anticipated policy items by the markets, households and businesses. Although fiscal package discussions have been at an impasse for months, without the spotlight of an election looming and with households and businesses struggling, we could still see a fiscal package near 1 trillion USD. This could help stabilize the economic recovery, but it may not necessarily ensure its durability as the pandemic continues. For that reason, an accommodative Federal Reserve may end up doing more of the heavy lifting to support the economy.

A divided government is unlikely to agree on tax priorities, creating obstacles for Biden’s proposed corporate and individual tax hikes. However, at least more muted spending in the face of gridlock could help begin to chip away at growing deficits and debt, particularly with a more modest fiscal package that would result in a lower deficit in 2021. Still, if meaningful attempts to restore federal finances through tax hikes or spending cuts are not made at some point, inflation and higher rates are likely, which could both hurt the bond market and challenge equity valuations in the long run.

Other key domestic policy areas include infrastructure, health care, energy and climate change, and regulation. An infrastructure bill is something both sides have expressed interest in, and could certainly provide a welcome boost to growth and employment, and provide a tailwind for industrials and materials. However, as with the fiscal package, the key will be if both sides can compromise on the specific priorities.

In health care, the Affordable Care Act is unlikely to see significant changes under a divided government, but the Biden administration could increase funding, a positive for some subsectors within health care.

Similarly, there is not likely to be significant structural change in energy, although the executive branch does wield some power in this area, so under a Biden administration there may be more re-regulation through the Environmental Protection Agency, and perhaps a movement toward clean energy. Biden would also likely recommit to the Iran Nuclear Agreement, which could bring more oil supply from Iran back online and therefore put pressure on oil prices.

There also may be more regulation for technology sectors, as there does appear to be political will to enact greater anti-trust legislation, a potential headwind for these sectors.

Finally, from a foreign policy perspective, the focus will likely remain on China and trade. Biden would still likely be tough on China, although perhaps primarily through multi-lateral trade agreements aimed at putting pressure on China. More importantly, a Biden administration could yield a more predictable policy approach, which could reduce market volatility and business uncertainty relating to U.S.-China trade. This would also likely put downward pressure on the U.S. dollar, which would be supportive for international equities.

A Biden administration would also have a looser stance toward immigration, although sweeping immigration reform would be limited by a divided Congress. Incremental additional immigration would boost labor supply, and therefore, in the long run, growth.

We think Dr. Kelly’s comments succinctly lay out of of the key policy points of a potential Biden presidency, and we will be watching to see how these ideas are implemented.  We also note that there has not been a formal concession of the election, and so additional market volatility may ensue as legal challenges work through the court systems.  However, we are also aware that long term market performance is generally undeterred by the party in the White House. 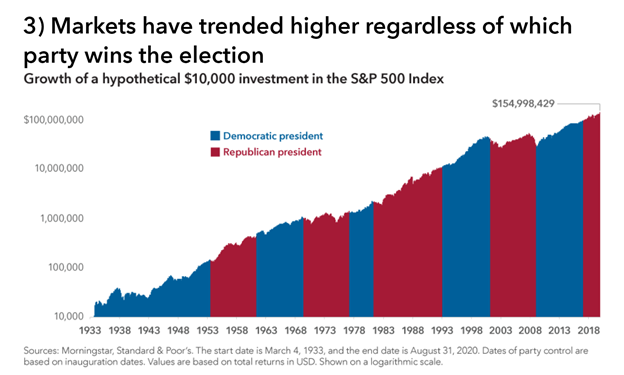 And, as this chart from Capital Group shows, investing regardless of control of the House and Senate has also historically been a prudent decision: 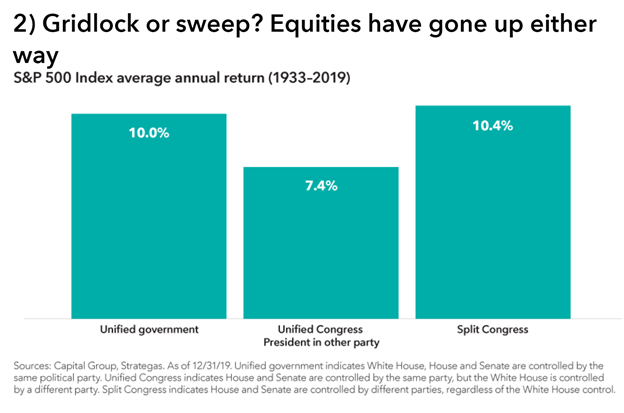 We look forward to moving forward and getting some respite for the next two years from all of the political mailers in our mailbox and election advertisements on TV!