Other than the very obvious and depressing headlines that Sarah Yakel deftly navigated in her last post, the next highest thing on investors’ minds is inflation and what to do about it. Like anything when it comes to investing, there is no perfect answer to how to invest in the face of inflation. According to BTN Research, during the 16 highest inflation years over the last 100 years (1922-2021), the S&P 500 has been up 8 years and down 8 years. The index’s average return for all 16 years is a gain of +3.9% per year (total return).

From Capital Group: “Supply shortages and other pandemic-related factors first triggered the rise of inflation. Demand for many goods began to outpace supply, which boosted prices. Towards the end of 2021, however, the trend began to look less temporary and more lasting. The Consumer Price Index (CPI), a favored broad level of inflation by many economists, increased to 7% by year-end, the highest in nearly 40 years.” 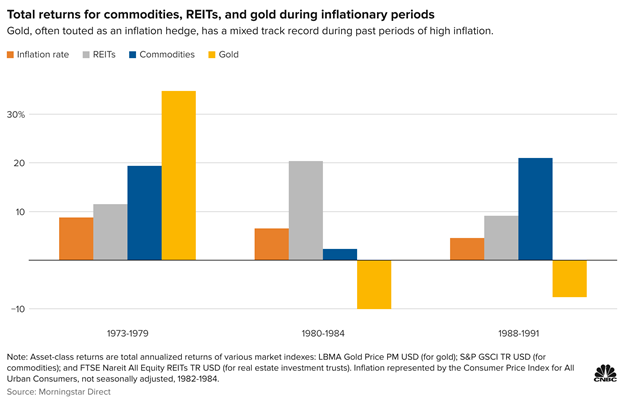 Although gold has had little correlation with inflation, it has provided positive returns over the very long term. From Greg Iacurci at CNBC, “Of course, these analyses examined periods of less than five years. Gold’s record over the long term – spanning several decades – is more consistent with its reputation as an inflation hedge.”

One other answer to spikes in inflation is Treasury Inflation-Protected Securities or TIPS, because the rate that TIPS pay is linked to the CPI. However, even TIPS suffer from interest rate risk just like other bonds. From Timothy Ng at Capital Group, “…while inflation has remained elevated, the Bloomberg TIPS Index had a negative return in January due to the broad rise in bond yields.” However, over longer periods of time, TIPS have provided positive returns and can play a valuable role in a diversified portfolio.

TIPS have notched positive returns over most three-year periods

There are certainly other solutions out there to attempt to fight inflation; some types of stocks, REITs (real estate investment trusts) and commodities have provided some defense. It should come as no surprise that the energy sector of the S&P 500 is the only one that is positive so far in 2022.

Much like fighting inflation is difficult, so is fighting high altitude and frigid temperatures as my son and I did while in Breckenridge at the top of “the highest lift in North America.” Very low/no visibility, frigid temps and strong winds made this a less than fun trek (like navigating the markets in 2022!), but maybe it was worth the picture?

PS: I can’t resist at least one anti market-timing quote! Oaktree Capital’s founder Howard Marks quoted Charlie Munger of Berkshire Hathaway in a recent memo, saying that “selling for market-timing purposes actually gives an investor two ways to be wrong: the decline may or may not occur, and if it does, you’ll have to figure out when the time is right to go back in. Further, if there is no decline in prices, you have to be willing to re-enter the market at prices higher then where you sold. The bottom line is that market timing in an attempt to sidestep dips in the market is extremely difficult and we don’t endorse it as a way to consistently compound the value of one’s portfolio.”