What Did You Expect?

Once again, the market hung on every word that came out of Fed Chair Jerome Powell’s mouth, and while his comments were exactly what most expected, the market reacted as though continued Fed funds rate increases were a shock. Powell’s comments came during a speech at the Kansas City Fed’s annual policy forum in Jackson Hole, Wyoming. Some commenters were looking at the way he spoke about the continued efforts to combat inflation vs. the fact that the fed funds rate will continue to go up.

Contrary to what some headlines are shouting, the inflation numbers are actually starting to improve. However, the inflation rate is still high above the Fed’s (and the rest of our) target rate of about 2%.

Here is a summary of Powell’s statements via @TheTranscript_

“Restoring price stability will take some time and requires using our tools forcefully to bring demand and supply into better balance.”

“While the latest economic data have been mixed, in my view our economy continues to show strong underlying momentum. The labor market is particularly strong, but it is clearly out of balance, with demand for workers substantially exceeding the supply of available workers. Inflation is running well above 2 percent, and high inflation has continued to spread through the economy.”

“While the lower inflation readings for July are welcome, a single month’s improvement falls far short of what the Committee will need to see before we are confident that inflation is moving down.”

“While higher interest rates, slower growth, and softer labor market conditions will bring down inflation, they will also bring some pain to households and businesses. These are the unfortunate costs of reducing inflation. But a failure to restore price stability would mean far greater pain.”

As Blaine Rollins at Hamilton Lane jokingly put it, “US Federal Reserve Chair Jerome Powell speaking at 6,200 feet somehow sounds different to equity investors…” In other words, nothing has really changed, but market is reacting as though things have changed. 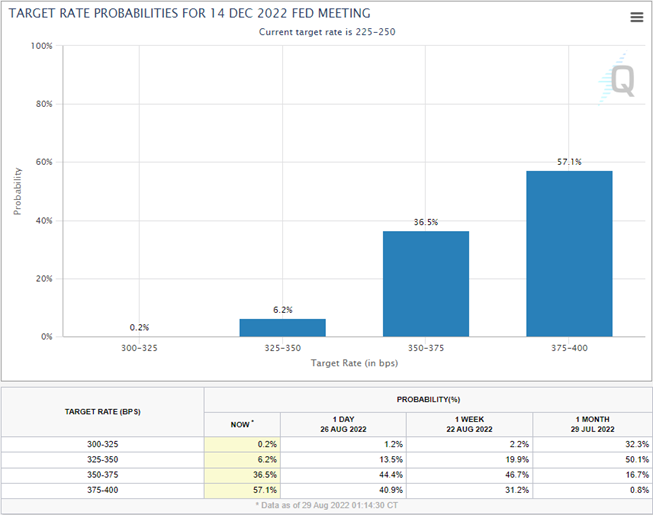 Keep in mind that the whole point of increasing interest rates is to intentionally decrease prices and in a somewhat counterintuitive way, slow purchasing. The Fed’s hope is that they can slow things down (thereby lowering prices), but not bring the whole economy to screeching halt and cause further market decline. Whether or not that longer term goal can be achieved remains to be seen, but after the reaction to Powell’s most recent comments on Friday, the goal got a little harder to attain. Personally, I think the recent decline is a result of investors taking some gains off the table after a significant July rally, but maybe it was an overly optimistic hope that Powell would back off of his aggressive interest rate policy.

Powell changing his policy stance had about the same chance as the last place DC United soccer club defeating the Philadelphia Union, a game which the Meridian team and family attended in August. We managed to have a fantastic time despite the home team loss. And, much like the market’s hopes for a Powell change of tune were all for naught, so too was the hope that DC could do better than a 7-0 drubbing.

Here’s to lower temperatures and inflation numbers as we enter the fall months!

What Did You Expect?