Out With the Old?

Happy New Year to you and yours! I hope everyone found time to spend with family and friends and didn’t get too caught up in The Space Between that Sarah Y mentioned in her latest post. Maybe that’s what it’s like to be fully retired and you forget what day of the week it is…I look forward to experiencing that for more than a week someday!

Until then, I definitely know it’s now a Tuesday after a long weekend and the start of a new year. And, the Santa rally that we looked forward to left us with nothing but coal in our collective stocking. It is human nature to measure the markets (and many other things) using the calendar year, quarters, months, and even days, but the factors that drive the markets don’t change with the same regularity.

Here is a look back at some S&P 500 performance data from 2022. Despite a weak December, the 4th quarter as a whole showed some improvement above the newly-formed market lows at the end of September. And, apparently having “a case of the Mondays” is a real thing. 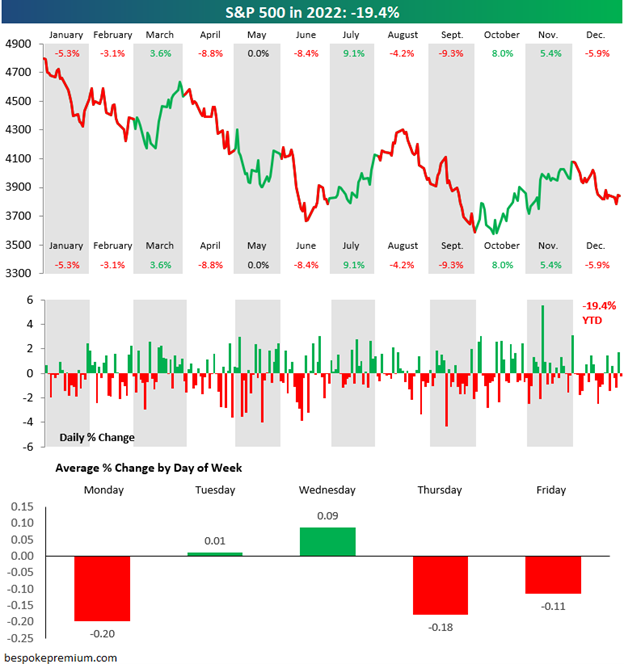 Unfortunately, the same data points that created much of the market decline and volatility in 2022 still persist despite the year changing to 2023. Inflation will continue to be the most watched indicator of economic health, and its path will inform the Fed’s interest rate policy. From Fed Chairman Jerome Powell in mid-December, “We will stay the course until the job is done.” The main ‘job’ being reducing inflation to around 2%

One of our favorite follows, David Kelly of JP Morgan, summed up things nicely in his latest weekly notes:

“…in the midst of all of this confusion, investors should recognize two certainties:

First, after a year of rising interest rates, falling stock prices and a soaring U.S. dollar, valuations for both domestic and international financial assets are much cheaper than they were a year ago. Dramatic market movements have, in many cases, distorted portfolios and opened up a wide range of investment opportunities that deserve to be explored.

Second, while news outlets and social media feeds will continue to try to draw an audience by raising the alarm on a wide range of issues, no one will cover any improvement in the economy, any lessening of global tensions or any resolution of the issues that plagued markets in 2022. For this reason, investors should resolve to examine the environment for themselves and invest while prices are more reflective of the state of public attitudes than the reality of economic prospects.” (note: I added the underlining and bolding of the above quote!)

It goes without saying that predicting market outcomes is next to impossible and the indicators never present themselves in black and white. If only it were as easy as telling our two dogs apart from each other!

Out With the Old?