Client question: What do you think is going to happen in the markets in 2018?

Answer: Well, the global economy remains strong for the most part, so we see continued growth (but maybe not as much as last year) in 2018. There is limited chance of recession, and inflation continues to be low.

Client question: So, how should I invest for this year?

Answer: You should remain broadly diversified (own lots of different stuff that doesn’t act the same), and you should be invested appropriately for your stage of life and risk tolerance.

The reality is that the closest thing to a “magic bullet” for investors is diversification. You have read that many times before, in Meridian’s blogs and elsewhere, I am sure. But, with 2017 over, we have fresh new data evidence to further the argument. Consider the below (you can click to enlarge) from www.novelinvestor.com: 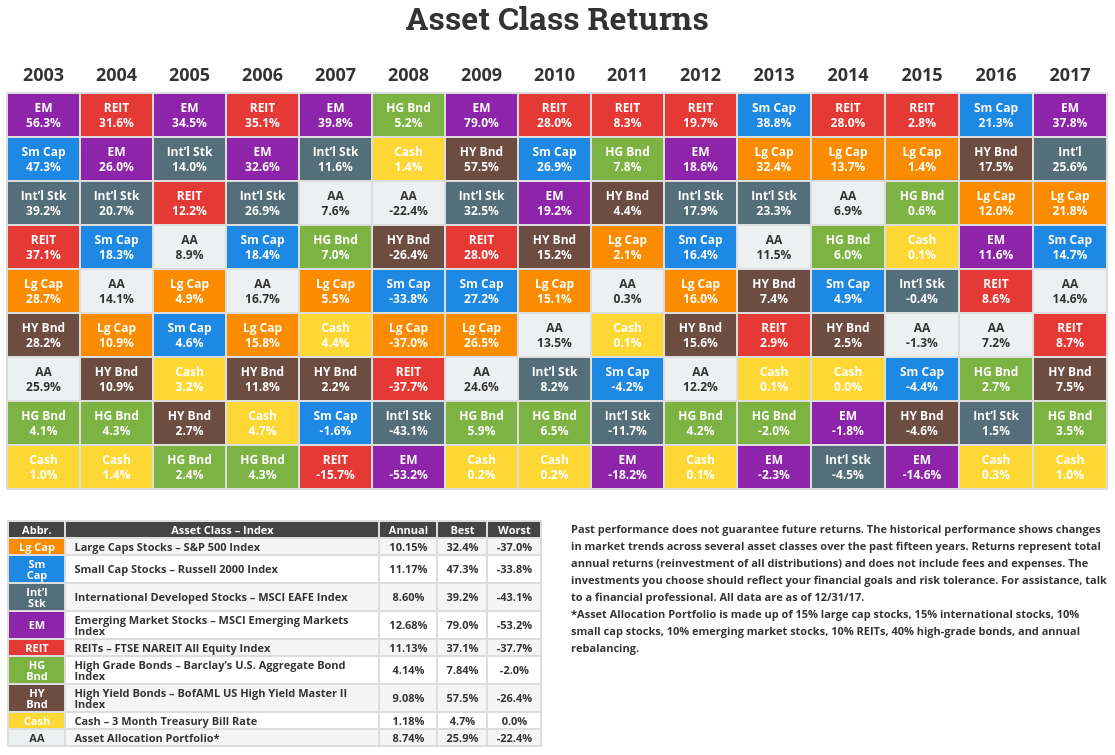 As you can see from the above chart, the AA or Asset Allocation option has the smoothest ride. While it is never the best performer, it is also never the worst. Keep in mind that the mix in the above example is somewhat arbitrary and is probably not the exact right blend for you. However, it does illustrate the point that there is no consistency with regard to which part of the market will perform the best and when. Putting your money into only one type of investment might work for a little while, but not for the long term.

My middle daughter, Lyla, seems to have been born with this understanding. Maybe it’s because her dad has been in the business since well before she was born, or it’s more likely because she REALLY likes stuffed animals.

As you can see from the picture above, Lyla is pretty well diversified across many stuffed animal types. However, she seems to have a lot of her money (and affection) invested in unicorns. A prudent investment manager would tell her to sell some of those unicorns, and buy some other types of animals. An irrational Lyla would tell said investment manager that he is crazy and that unicorns will ALWAYS be awesome. She might really love unicorns right now, but if you know anything about the whims of 6-year-old girls, that could change in an instant.

3 thoughts on “Don’t Put All Your Money in Unicorns”