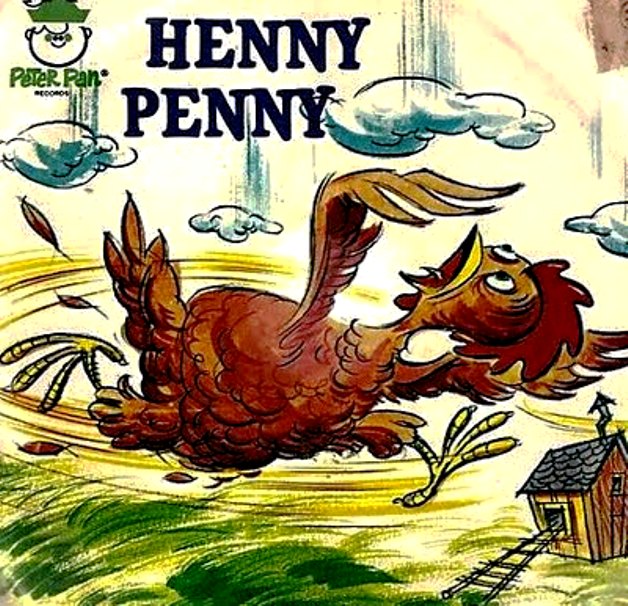 Sometimes, when writing a weekly blog post, my partner, Sarah Yakel, and I struggle to come up with a good topic that hasn’t been covered recently and is hopefully interesting. While I am certainly not thankful for a market decline, it does provide an obvious topic about which to write.

The first thing that comes to my mind (probably because I am a parent of young children) during a market decline like the one we are in currently, is Henny Penny. If it’s been a while since you’ve read any children’s books, Henny Penny or Chicken Little is the main character of this particular story. In most versions, Henny Penny is sent into a panic when an acorn hits her on the head. She proceeds to run around wildly proclaiming, “The sky is falling, the sky is falling! Run for your lives!”

The terrified chicken’s panic-stricken run through the barnyard causes many of the other animals, Goosey Loosey, Turkey Lurkey, Ducky Lucky, etc. to also run blindly to seek cover from the falling sky. In the story that I have read to my kids, they end up running into a fox who takes advantage of their panic and tricks them into running into his mouth (they think it’s a cave). Because most kids’ books have happy endings, the fox ends up sneezing them all out and they all realize how silly they had acted.

In my brief Wikipedia research on this very important topic 😊, the story has been around since the early 1800’s. The first was likely published by Just Mathias Thiele in Danish in 1823. The main character in that version was named Kylling Kluk.

While I don’t mean to write a flippant commentary on our clients’ accounts going down sharply in a short amount of time, I do think it’s important for all of us as investors to not run panicking in the face of these types of market movements. It’s been quite a while since we have been reminded that the stock market does, in fact, go down.

We don’t believe the recent declines are indicative of a looming recession. In fact, many of the underlying numbers still show quite a few positives. The reasons for this most recent correction seem to mostly be attributed to a rise an interest rates, and the fact that the Fed may raise rates more frequently than initially indicated. Finally, January just started off too hot with around 7% growth. So, we are kind of back to where we started the year (at least, as I write this!).

Earnings results from many S&P 500 companies have been very strong thus far. As of last week, about 70% of companies were reporting higher than estimated revenues for the last quarter of 2017. See below from JP Morgan: 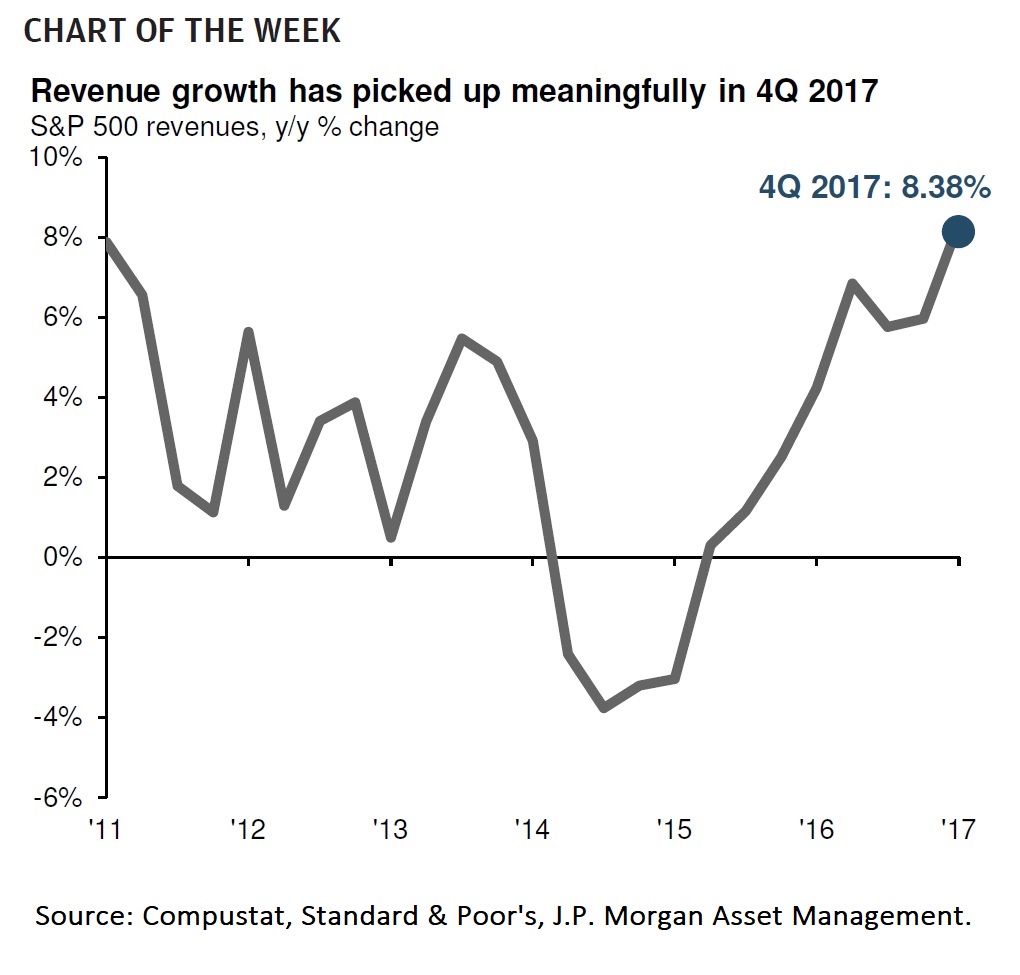 As I mentioned in a recent e-mail to our clients, Greg McBride, Bankrate.com’s chief financial analyst had a very nice comment to sum up the current situation: “The market had gotten a little bit ahead of itself in recent months, so a brief pullback is to be expected. Take a deep breath. Go for a walk. But whatever you do, don’t let a 4 percent pullback scare you to the sidelines.”

Don’t be like Henny Penny or any of her friends. You may end up in the fox’s mouth, even though it initially feels like a warm cave! Sudden and rash decisions can often lead to poor investment results over the long term. Usually, ‘waiting till things get better’ means that the markets have already gone back up and may be poised for another decline. Getting into that cycle of market timing can be an endlessly frustrating experience.

From our view, the sky is not falling, but we do still get hit on the head by acorns from time to time. And, it can be painful.